Trusty named first-year Teacher of the Year by OSD 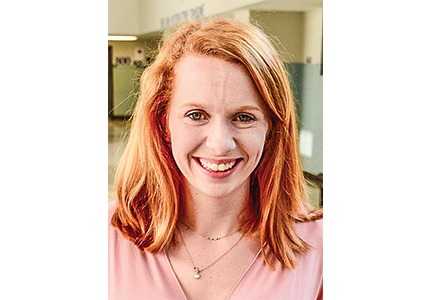 Callie Trusty must be doing something right; she is just not sure what that is exactly. With less than a year of experienced under her belt, Trust was named the Oxford School District’s First-Year Teacher of the Year for the 2018-19 school year.

A fifth-grade English Language Arts teacher at Oxford Intermediate School, Trusty is in her eight month as a teacher. She spent last year as a student teacher for a sixth grade class at OIS following graduation at the University of Mississippi.

“My students seem to be learning and growing and that’s all that I can ask for,” Trusty said. “They’re growing in not only academics, but they’re growing up as good citizens, they’re doing things for each other that I didn’t do as a fifth grader.”

Trusty, a Water Valley native, never envisioned herself as a fifth for sixth-grade teacher; she wanted to teach at the kindergarten or first-grade level. By the fourth week of her student teaching Trusty realized a higher-grade level is where she wanted to be and was hired by the Oxford School District to teach fifth grade.

The education system has changed greatly in in the past twenty years. Much more is expected of kids at an earlier age than before, putting a lot of pressure on teachers to be able to deliver high test scores.

“They’re doing things now in fifth grade that I did in ninth grade,” Trusty said. “Looking at the curriculum and the standards, we’re asking a lot of our fifth graders and they’re measuring up to it. They can be challenged more if need be. They’re doing great things.”

Winning the award was a shock to Trusty, though she had a feeling something was up when asked by OIS principal Steve Hurdle to come to the School Board meeting this past Monday and wear something nice and be ready to take a picture. Being the only first-year teacher at OIS, Trusty got an idea of why her presence was requested. With her parents and her son in attendance, along with some of her students, Trusty received her award.

It has been an adjustment for Trusty, who is balancing life as a single mother and as a teacher. She has served as a role model to her five-year old son who has grown up watching her do her homework on late-nights and earning her degree at Ole Miss in order to secure a job that Trusty notes was very important moment in her life.