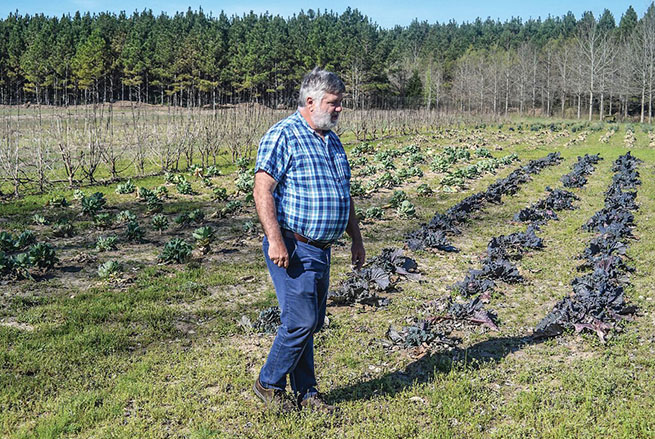 While driving around his six acres of fields in his pickup truck, Doug Davis talks about what his last month has been like. The weekend of Feb. 23 brought record rainfall and flooding to Lafayette County, and Yokna Bottoms Farm suffered.

When the water receded and damage was assessed, it felt like a total loss. Floodwaters topped off between 4 to 6 feet in the fields, submerging their one tractor, a travel trailer that served as housing for one of their workers as well as two large restaurant grade refrigerators. Those were just some of the key items Davis had to replace or, at best, completely restore if the farm was going to have any hope of continuing on.

Davis also lost 15 of his 60 chickens to the flood. He later lost several more to raccoons that managed to get into the coop from a damaged fence caused by the flooding. It was the first time in the farm’s history Davis has lost any chickens.

It is a landmark year for Yonka Bottoms, which turns 10 years old this year. The farm has become a key component of Lafayette County and surrounding areas, serving as a community supported agriculture farm which allows locals to buy local fruits and vegetables.

“It’s been a struggle mostly because it hasn’t dried out,” Davis said. “This last week or two has been the first time it’s dried out all spring. …We’re just kind of prioritizing things.”

By day, Davis is an educator, teaching Educational Administration at Ole Miss along with his wife Jill, but by night – and any other time Davis can spare – he is farming. Davis made the move to teach at Ole Miss in 2007, coming from Georgia State in Atlanta. He wanted to also find land to fulfill his interests in gardening and farming, something he’d spent time doing during the summers of his formative years.

During his time in Atlanta, Davis grew vegetables in his backyard but wanted a bigger piece of land. Initial searches proved unfruitful in the first months, and Davis gave up the hunt. Then, he found 38 acres of land where he and Yokna Bottoms currently call home.

Throughout the first nine years, Davis has experienced what every farmer does, good years and bad years. There were times he has wondered, with a full-time job, how long he would keep the farm going. That is a decision Davis wants to make on his own terms and not dictated by Mother Nature’s wrath.

In the past month, the ground is slowly drying out and Davis has even begun planting some garlic and red onions. They are slightly behind schedule and would be even without the flood occurring.

“The worst thing that happened with the flood is the ground was already wet, and then we had four inches, six inches and seven inches (of rain),” Davis said. “That filled everything up and then (Feb. 22) we had almost seven inches of rain and the ground couldn’t soak any of it up.”

Yonka Bottoms is back to normal, or as normal as it can be under the circumstances, but with each passing day, the fields are getting back to how they were before that fateful weekend in February. The farm is a small business for Davis, and he intends for it to last. Reaching 10 years is something he does not take for granted.

It might take a little longer than usual to get enough crops to sell, but residents will still find Davis at the Midtown Market in Oxford. It will mark another example of Yokna Bottoms Farm getting back to normal.