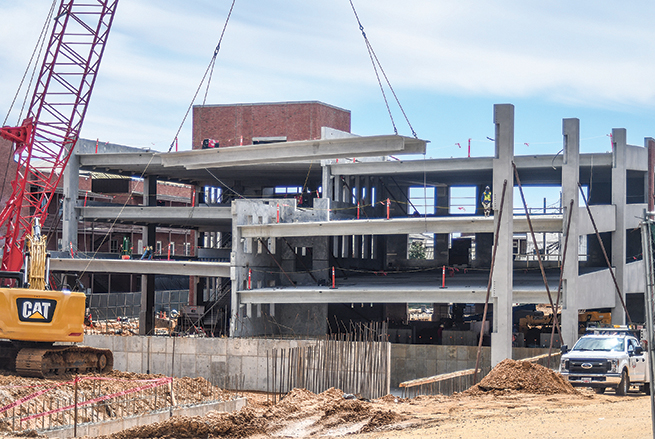 With the new parking garage opening in five months on the Square, the Downtown Parking Commission has begun discussing ways to fund their new parking system. During a special meeting on Thursday the commission weighed three options the city can take.

Two of the three options garnered the most attention during the lengthy meeting on Thursday morning. The first option included tier pricing in the new parking garage as well as making the remaining free parking lots around the Square no long free. In regards to the parking garage pricing, the first floor would be .75 an hour with the second through fourth floors costing .25 an hour. The metered parking would remain at $1.25 an hour and the currently free lots would now cost residents .75 an hour. One lot would remain free, which would be the lot under the water tower on the south side of the Square.

Monthly Parking permits were also discussed with the first option where people could buy a garage permit for $25 or $50 for the lot located behind City Hall and the two lots behind Something Southern.

The second option that was heavily discussed amongst commissioners involved raising the price of metered parking around Square by a quarter to $1.50 an hour. And making the second through fourth levels of the parking garage free. Making a majority of the parking garage spots free would result in the city losing revenue.

The commission voted to present the Oxford Board of Alderman both options, recommending the first option but presenting a revised version of the second option for the Board to consider. The Parking Commission will present the options during the April 16 meeting.