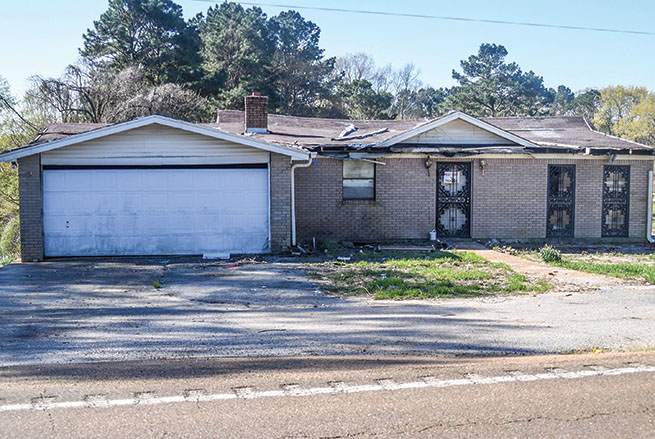 The Lafayette County Board of Supervisors gave the owner of this house on Highway 30 two more weeks to clean the property, in Oxford, Miss. on Tuesday, April 2, 2019. (Bruce Newman, Oxford Eagle)

After several extensions, the owner of a Highway 30 property now has two weeks to begin the demolition process, or the county will take it over. In January, the Board of Supervisors approved the cleaning of the property by the county, but in February approved a recommendation by county building inspector Joel Hollowell to remove the structure altogether after deeming it unlivable.

Since then, the owner of the property at 246 Highway 30 reported to the county his intentions to clean it himself and allow his daughter and grandchild to live in it upon renovation.

During Monday’s Board of Supervisors meeting, Holloway provided another update, stating the inside of the property was cleaned out, but no visible evidence of demolition of the property could be seen on the exterior.

During the meeting, District 1 Supervisor Kevin Frye noted the county has dealt with this specific issue regarding the Highway 30 property since 2012.

“I don’t think there’s any doubt that we’ve gone above and beyond to communicate with him, been very reasonable with him,” Frye said. “I think he just needs to understand he’s got a firm timeline.”

Hollowell said the last time he communicated with the property owner was last Thursday. He claimed he has not been able to get in touch with him since. Hollowell said he could not tell if any demolition had begun on the interior of the property and was unable to look inside as of Monday night.

District 1 Supervisor and president of the Board Jeff Busby allowed approval of Hollowell’s recommendation for a final deadline since the owner has shown ‘good faith’ by beginning to clean up the property.

“I don’t know if he’s started doing demolition on the inside or not,” Busby said. “If he’s in the process of doing something, I’d much rather he clean it up than the county have to go and clean it up.”

The deadline for the property owner to comply with the county’s request is April 15.