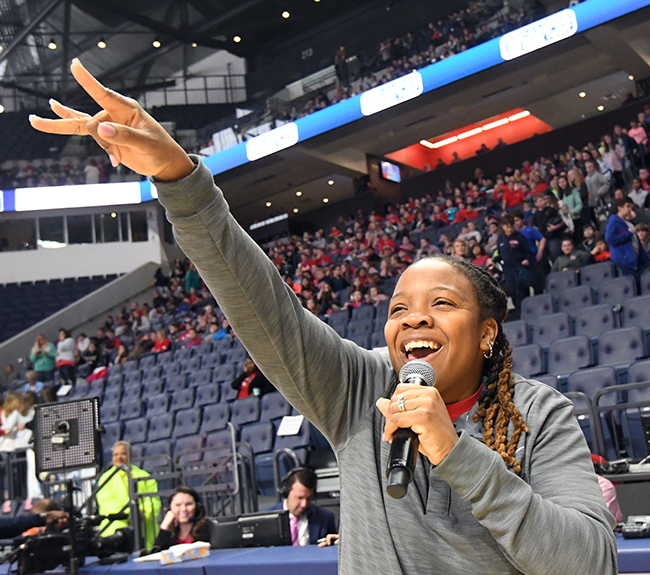 Yolett McPhee McCuin speaks to the crowd before the Ole Miss game against Louisiana-Lafayette game at the Pavilion at Ole Miss, in Oxford, Miss. on Wednesday, December 12, 2018. McPhee-McCuin has agreed in principle to a new four-year contract, Ole Miss Vice Chancellor for Intercollegiate Athletics Ross Bjork announced on Thursday, April 4, 2019. (Bruce Newman, Oxford Eagle via AP)

“Coach McPhee-McCuin has been a breath of fresh air for our women’s basketball program from the moment she stepped foot on campus,” Bjork said. “Her energy and passion for our student-athletes to excel in life and on the court shines through in every moment that she leads our program. She inherited a very tough situation, but coaching, hard work, commitment, recruiting and patience are the key ingredients as she and her staff build the program to meet the high standards of Ole Miss women’s basketball. One day soon, we will look up with excitement as Coach Yo will deliver a great program that is built to last. We are thankful for Coach Yo’s commitment to Ole Miss and will continue to build the program together.”

McPhee-McCuin, who one year ago today accepted the position as the Ole Miss head coach, is coming off her first season at the helm for the Rebels. Despite inheriting a team that had just four returnees, McPhee-McCuin built a nearly brand new Rebel roster and rallied them into a high-energy unit from wire-to-wire.

Under her guidance, Ole Miss improved its SEC win total by two games from 2017-18, took down a ranked opponent on the road for the first time since 2011 at No. 16 Kentucky on Jan. 13 (the first win at UK since 2007 as well), and mentored the first All-SEC honoree for the Rebels since 2014-15 in Second-Team member Crystal Allen, who was consistently one of the top players in the SEC all season long.

“I can’t believe it’s been a year already,” McPhee-McCuin said. “I was extremely grateful for the opportunity last year, and to this date the feeling has not changed. I would like to thank Ross and Chancellor Sparks for their vote of confidence in my staff and myself as we take the necessary steps to build this program back into a national brand. This year has not looked like success as far as wins and losses, but if you had a chance to watch us play this year it is evident that we are heading in the right direction. There is no doubt that with time and continued effort we will be a force to reckon with in the SEC.”

McPhee-McCuin and her staff also made community engagement a high priority, as the Rebels participated in numerous community service events throughout the year and made a renewed push to engage with fans and season ticket holders both at games and in the community at large.

“I sincerely appreciate everyone that has attended a game, reached out to us on social media and supported our program,” McPhee-McCuin said. “It is my hope that we can continue to fill The Pavilion and make women’s basketball games the place to be in town. Let’s make it known to everyone that Oxford loves women’s basketball. If you haven’t been to a game, let me be the first to invite you to one next season. I promise you, you won’t be disappointed.”