Friday Bases Loaded: No time for a Rebel lull as Gators come to town 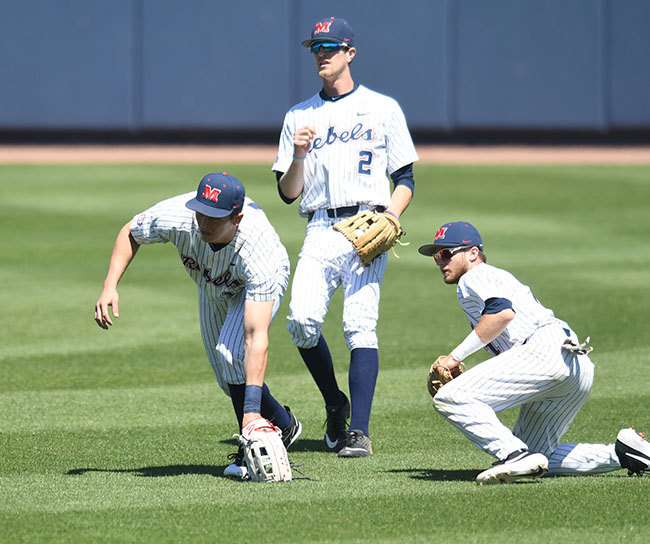 Coming off one of the most befuddling losses in the 2019 college baseball season, Ole Miss needs to get back on track quickly. The Rebels lost to North Alabama on Tuesday, a team that came to Oxford with a 5-21 record, playing their inaugural season in Division I baseball. An RPI 285 loss is one of the worst you can have, and Ole Miss should be hungry for their first home SEC series since mid-March.

Coming to town for the three-game series is No. 21 Florida, a team who’s battled the same consistency problems as the Rebels. However, the Gators are coming off one of arguably their best week of the year, beating rival Florida State before pulling a three-game sweep over Alabama. Here’s four things to look out for entering the first ranked SEC weekend in Oxford.

First Base: The Rebel quest for consistency

Just when you thought Ole Miss had finally found their stride, more cause for concern arises. Taking two of three games last weekend from then No. 8 Arkansas, on the road, was the best and most well rounded this Ole Miss team has looked all year. Tuesday was the worst they’ve looked.

“Ultimately we just have to play better. It’s baseball and everyone can beat you on any given day,” said junior Grae Kessinger said. “Every day is a new day. It’s just coming out and doing what you can to get better. Working on the little things and take it one day at a time. That day’s over and you can’t go back. You just have to learn from it.”

There’s a chance Tuesday was a one-game aberration for a team that still has sights set on Omaha. However, there’s also a chance that it’s a major cause for concern. Ole Miss couldn’t hit North Alabama pitchers Tuesday that had played just two games prior to Power-5 teams. Ole Miss also threw a handful of relief arms – Connor Green, Austin Miller, etc. – that are probably now not good to go come Friday.

Second Base: Can Nikhazy continue his hot SEC start?

Third Base: Also an up-and-down year for the Gators

Florida State and Alabama didn’t stand much of a chance last week against an angry Florida Gators team. Now ranked No. 21 by D1Baseball, it’s a Florida team that was, at one point earlier in February, a top-5 team in the nation. Then the Vanderbilt series happened.

Going into Nashville, the Gators got hosed, losing all three games to the Commodores by a combined score of 34-6. In One weekend, Florida went from a top-5 team nationally to nearly falling all the way out of the rankings at No. 24.

“They’re kind of a little bit like us, in the sense of there’s been some times that they haven’t played their best baseball. They’re super talented but there have been times where they haven’t scored as many runs as that offense is capable of scoring and times they haven’t been as good on the mound as they expect. But don’t kid yourself, they’ve played some really good baseball.”

It’s far from the only rough or interesting stretch in the Gator schedule, having lost three straight games to South Florida, North Florida and Miami earlier in the season. Now 21-10, 4-5 in the SEC, the Gators have won five in a row coming into oxford, including a three-game sweep over Alabama by a combined score of 21-7.

No Rebel batter has been as good as junior first baseman Cole Zabowski over the past four. Zabowski is hitting a blistering .471 over his past four games, with seven RBIs to go along. He’s now driven in a runner in five straight games.

The series with Florida opens Friday night at 6:30 p.m. Saturday’s game, following the afternoon Grove Bowl, will start at 7 p.m., televised on SEC Network and Sunday’s afternoon game will start at 1:30 p.m.