Ole Miss rides 17 hits and great night of long relief from Myers to big win over No. 21 Florida 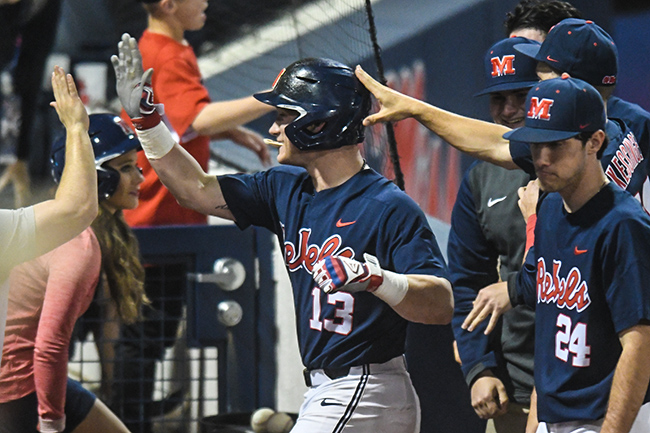 OXFORD – Despite an early and abrupt exit by Ole Miss starting pitcher Will Ethridge, the Rebels controlled No. 21 Florida from start to finish on Friday night. Amassing 17 hits on the Gator arms, the Rebels took game one of the series by a final score of 12-4.

“It was a great night for us. (Florida) didn’t have their best stuff tonight,” said Ole Miss head coach Mike Bianco. “A lot of good nights for a lot of people in the lineup… We’re pretty good offensively, but I don’t know if we’re 17 hits against that sort of staff (good). We had a good weekend at Arkansas, and we’re starting to look a little more like ourselves offensively.”

The majority of the Ole Miss damage came in the third and fourth inning, when they tagged seven of the twelve runs. The long ball was the story of the third inning, with Tyler Keenan hitting a two-run shot for the first Ole Miss points and Cole Zabowski hitting a solo shot just two batters later.

Keenan wasn’t done, driving in another run one inning later with a single. Ole Miss would load the bases in the fourth for Cooper Johnson, who took a two-strike, two-out pitch to right field, scoring two more Rebels to make the lead 7-2.

They would tack on two more runs in the seventh to put the game out of reach, before Cooper Johnson added three more with a home run in the bottom of the eighth.

Will Ethridge left the game in the top of the fourth inning after rolling his ankle on a play covering first base. He stayed in the game for one more batter, a walk, before getting pulled after the training staff examined not only his ankle, but a blister on his throwing hand that caused him to miss a start earlier in the season.

Bianco said that the finger was the injury causing Ethridge to leave the game – his ankle should be just fine. He would throw just 3.2 innings, allowing two earned runs and three hits.

Tyler Myers threw a fantastic game in long relief of Ethridge. Coming in on short notice, Myers would pitch the final 5.1 innings. He threw a few weird balls in the fifth, resulting in some well hit balls for the Gators – two of which traveled for solo home runs. Myers didn’t allow a single runner on base in the game, striking out four and allowing just two hits.

“I’ve actually never had to warm up that fast,” joked Myers. “Locating low in the zone has been the key. (On the home runs), I was just leaving balls elevated in the zone. I’m very successful low in the zone and I was just overthrowing a bit. I just stepped back and recuperated and worked down.”

Allowing Myers to go the whole rest of the way is huge for a Rebel bullpen that will have to play a double-header tomorrow. Florida used six pitchers on the night; Ole Miss needed just two.

Florida’s Brady McDonnell had himself a day in the loss, going 3-4 with three RBIs and a home run.

For the Rebels offensively, Cooper Johnson had a himself a career night. Johnson went 2 for 4 batting on the night but drove in five runs on those career hits. His prior career high was only three. Thomas Dillard also reached base all five times he stepped to the plate, three of which on walks.

“It’s just been adjusting pitch to pitch. That’s the biggest thing,” said Johnson. “Other guys have picked me up all year when I don’t get the job done. I just wanted to be that guy in the moment (tonight).”

The win marked Mike Bianco’s 300th SEC win. With the Sunday game pushed to a double-header on Saturday, Ole Miss and Florida will play game two at noon on Saturday. Doug Nikhazy will pitch for the Rebels in game two, with a starter yet to be announced for the third game of the series, also on Saturday.

Friday Bases Loaded: No time for a Rebel lull…