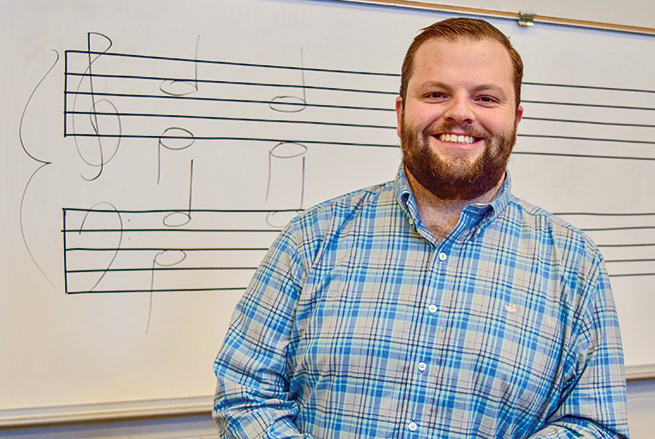 For a 16-hour period last weekend Thomas Ardrey experienced several emotions. During the Mississippi Music Educators Association annual conference in Hattiesburg last Thursday, Ardrey was named the 2019 Young Music Educator of the Year. It is an honor that goes to music educators who are still within their first five years of teaching.

The following day, Ardrey drove up to Jackson to see his fiancé, and Lafayette High School music teacher, Hannah Gadd, be named the 2019 Mississippi Teacher of the Year by the Mississippi Department of Education.

“A wide range of emotions,” Ardrey said. “When I got the award (on Thursday) you’re kind of on that high of, ‘oh, yay you got it’ and I never really got a chance to come down from that because I got to hotel, went to bed, got up, drove to Jackson and then (Gadd) gets this award and we just kind of rode that (wave). Sunday night we had finished getting ready for the week and we just both kind of took a deep breath and said, ‘wow, this really happened.’”

To be considered for the award, Ardrey had to be nominated by somebody in the state. It just so happened that his fiancé was the one to nominate him, while Ardrey and another teacher had considered nominating Gadd. Once nominated letters had to be written by the school’s principal, a student of the teacher’s and a parent of a student.

Sarah Jane Yerger wrote a letter on why her music teacher should be chosen for the award.

“Mr. Ardrey is so deserving of this award,” Yerger said. “I felt honored to be able to express my admiration for him and show how much all of his students and I appreciate and love him and what he does for our school.”

The year has started out on a high note for Ardrey and Gadd, but it will continue to get better for them. On June 8 the two will have their wedding before embarking on a honeymoon trip to London. After that, Gadd will begin her duties with the Mississippi Department of Education as part of being named the state’s top educator.

“We are very fortunate in our school districts that the arts are understood and the arts are very well appreciated,” Ardrey said. “It means a lot. …the year is definitely off to a good start.”