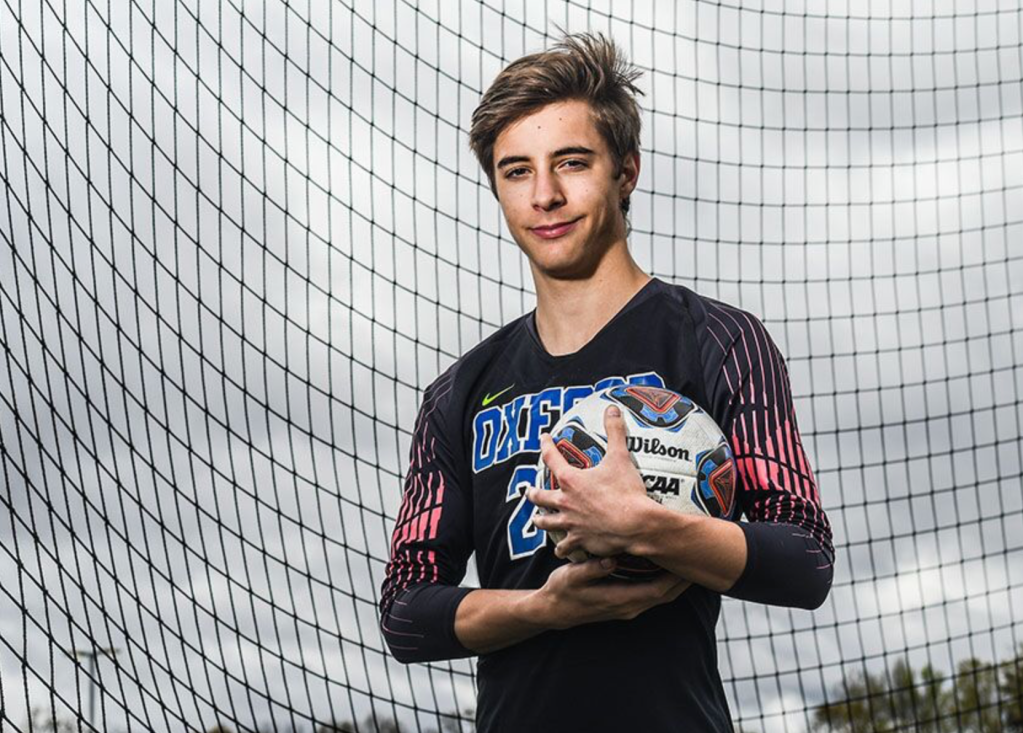 It didn’t take long for Griffin O’Neill to cement his place in Oxford soccer lore. Just a sophomore in 2017, O’Neill started at goalkeeper for the Charger state championship run, one capped with a 3-0 win over West Jones to bring the state championship trophy back to Oxford.

But things were different then.

A sophomore, O’Neill was a young cog in the wheel of players much bigger and more experience than them. The front line in front of him was anchored by a senior center and a defense that allowed just six goals on the year. Now, O’Neill was a senior captain for the Charger team that went 15-6 in Class 6A.

“I had to take more of a backseat role as far as leadership goes back then. Now I had to step forward as more of a leader,” O’Neill said. “This last season I felt more in control and prepared than I was back then. I took a much bigger leadership role but it wasn’t a huge transition for me because I had been staring for so long.”

Oxford may not have been as dominant this year as they were back in 2017, but they were still darn good. The defense, anchored by O’Neill allowed just 13 goals in 21 games, and O’Neill himself recorded 69 saves on the year and an average of 0.585 goals against per game.

His coach credits the Tupelo game this year, albeit a loss, as the game he truly saw his senior goalkeeper take things to the next level. Oxford lost the game 4-2 in overtime, but were outshot 5-1 late in overtime so it was nearly impossible for Griffon to hold them off on his own.

“The first Tupelo match this season was one where, he’s always been a good keeper, but he was incredible,” said Oxford head coach Charles Sabatier. “That was one of the matches where I saw him start taking ownership of being the senior leader on that back line.”

O’Neill tags most of his improvements to the soccer IQ angle – learning when to come out and get crosses and when the right time is to come out of the goal and when to call his defenders back. For Sabatier, he doesn’t disagree, but the most notable change to the eye, between his junior and senior season, has to be his leg strength.

“The strength of his leg in both goal kicks and punts was remarkable,” Sabatier said. “For the first two years it was nothing impressive, but this year every goal kick and every punt was into the other team’s half of the field. I’m like ‘Huh? Where’d that come from?’”

Mostly, that change came from a technical change, according to O’Neill. He says he used to hit the ball off the side of his foot, causing it to spiral off to the side. As a senior, he made more of an attempt to hit the ball more flush with the laces.

O’Neill won’t be going too far away next year, enrolling at Ole Miss to study history. An anchor on a good Ole Miss season, and a sophomore keeper back in 2017 for a state championship season, Oxford soccer will not forget Griffin O’Neill.

Freeman has a bit of a genetic lineage. His mom played soccer at Virginia Tech and his dad was once drafted into the MLB. A junior, he led the Chargers with 20 goals.

“If he continues on his trajectory, next year could be special for Freeman,” Sabatier said. “He was decently fast his sophomore year. His junior year there wasn’t a guy faster than him on the field.”

Alex Fikes has been around the Commodore soccer program for quite some time. While his older brother played for Lafayette, Fikes was with the team as a manager when he was in fifth or sixth grade. It wasn’t long before he was starting on the varsity team.

As a senior, Fikes came into the season injured, taking him a while to get back into form. Regardless, he led Lafayette in goals and was tied for third on the team in assists.

“By the end of the year, Alex was doing some pretty special things for us. He’s so fast and he can shoot a ball from just about anywhere,” said Lafayette head coach Gene Anderson. “As he’s gotten physically bigger and faster, he’s become such a good player for us.”

“He made the varsity team in seventh and eighth grade, and I could tell right then he was going to be a very good player,” Anderson said. “I’ve known for years he was going to be a good player for us. He’s not as fast as Alex, but he has really good ball skills and he knows the game. He’s very technical. We’re expecting some pretty big things out of him next year.”

A senior captain this year, Mayo’s impact showed up more on the field than in the stat sheet. For a team losing nine seniors from the previous season, Oxford needed some veterans to step into a leadership role. Mayo did just that.

“I was a little nervous going into this year because last year’s senior class was so strong. Our seniors really stepped up and led the team by example and Thomas was the leader of those guys,” Sabatier said. “Our midfield was definitely the strength of our team and Mayo was the captain of that midfield.”

“They got better at putting pressure on the other team’s midfield as quick as possible when we didn’t have the ball. And the reason they had so many assists was the number of great through balls to our attackers,” Sabatier said.”

Jake Moore played every game this year for the Commodores, which doesn’t say nearly as much about his drive as the fact that he played his sophomore with a broken wrist. Anderson said that Moore is one of the most improved Commodores he’s had since middle school.

“He’s just been the kid that really enjoys soccer and has put in the work to get better and physically stronger. He’s a smart kid and his game IQ has really improved, so that helps so much on the field,” Anderson said.

“They’re both quiet leaders. They’re not very vocal, but they love the game and they love practice,” Anderson said.

Jaylin Owens was a football player that Anderson got to come play soccer in 9th grade. According to Anderson, he had a special ability to grow his talent really quickly on his own. “Owens improved a lot in a short period of time without anyone pushing him to do so.”

Where Owens picked up soccer late, Jones has played his whole life.

“He’s brought the intensity every year. As he got older he got more physical and played a lot harder. Whatever was best for the team, he’d do anything. Has played literally every position for us from forward to goalie.”

Brown was the leader of the Oxford defense. Sabatier said he was always the vocal voice from the back line, doing a great job communicating coverage with O’Neill. Brown was also a center back on the All-District team.