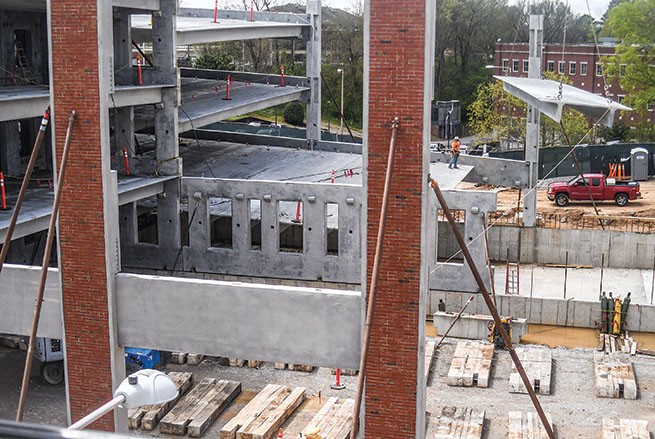 Work on the parking garage is halfway done, it was announced during a meeting of the parking commission, in Oxford, Miss. on Friday, April 5, 2019. (Bruce Newman, Oxford Eagle)

The downtown parking garage is halfway complete, according to the city’s Downtown Parking Advisory Committee. During their regular meeting on Friday morning, a representative with Innovative Construction Management provided an update on the garage’s status and indicated it is 50 percent complete with its pre-casting and erection.

Overall, the parking garage construction is still on target to hit its scheduled completion date of Sept. 24.

While the project is moving along, seemingly without hiccups, the funding debate and how much it will cost visitors to the Downtown Square is still ongoing.

During a special meeting held on March 28, the commission decided between three scenarios they wanted to recommend to the Board of Aldermen for their approval. Of the three, two stuck out to the commission and they continued debating them on Friday.

Scenario No. 1 is considered Revenue Model 1 and is the one the commission wants to present to the Board during their May 7 meeting. However, some members want to work through a few qualms and issues before officially recommending any revenue model.

Under the first scenario, drivers would park on the first floor at a rate of .75 an hour before 5 p.m. After 5 p.m., the cost would rise to $1.00 an hour. For the second through fourth floors, parking would cost .25 an hour all day. Parking around the Square would remain $1.25 per hour at all lots other than the Oxford Park Commission’s office lot under the water tower. This lot remains free in every scenario under consideration..

In No. 3, the parking rates would be free on the second through fourth floors and charge $1.00 an hour on the first floor. Meters around the square would also increase by a quarter to $1.50 an hour.

In Scenario 3A, the meter rates would stay at $1.25, but the second through fourth floors of the parking garage would have a fee of .25 an hour after 5 p.m.

The biggest debate amongst the commissioners was settling on one model at the onset or testing No. 3A for a year to accumulate data and revisit shifting to a different model if the data proved necessary.

“We don’t have historical data once this garage opens,” commissioner Mike Harris said. “Having a year under your belt can give you information to make adjustments.”