Oxford’s Redistricting Committee recommends new map to Board of Aldermen 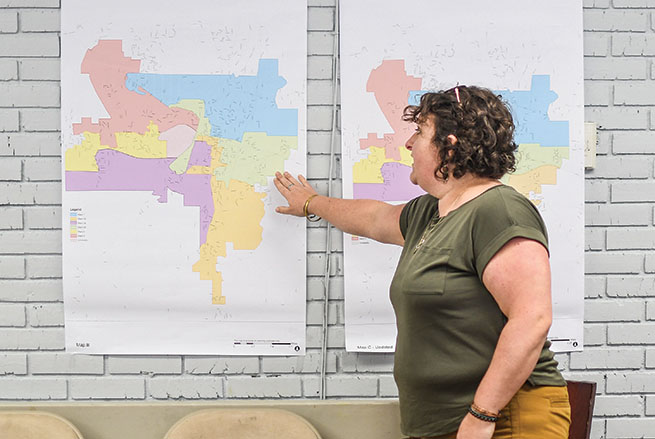 The committee decided between what were named Map B and Map C, with the group voting to recommend Map C for the Oxford Board of Aldermen’s approval at a future meeting. Members of the Three Rivers planning and development group provided the two maps as their final renderings to the committee.

“Our role here is to follow (Department of Justice) compliance and that was sort of what we brought and to follow the process legally,” Jenny Savely of Three Rivers said.

The committee began the redistricting process last November and had five meetings, including Tuesday morning’s meeting. They had to follow a list of criteria that had been approved in a resolution by the Board of Alderman, including that the number of wards will not exceed the number of members of the governing groups such as the City Board or county supervisors. Another criteria the committee had to follow was making sure the difference in population between the least populous and the most populous wards cannot exceed ten percent.

A vote of 6 to 1 approved a motion made by committee member Jason Derrick to recommend Map C to the Board of Aldermen. Committee member Brad Mayo attempted to make an amendment to Derrick’s motion of putting the Woodlawn area back into Ward 5 — Map C has it in Ward 6 — and to move the Aspen Drive and Bowie Drive area into Ward 6 for balance.

Mayo wanted to attach the amendment due to concern of weakening voting power in Ward 5.

“My argument with this is with (either map) it basically tells voters in most of the other wards that, ‘your votes don’t count as much as other wards,’ and I genuinely have a problem with that,” Mayo said during the meeting.

Mayo’s amendment did not receive enough votes to be attached to Derrick’s motion and Map C was voted to be sent to the Board as is. Mayo did state he felt Map C was the better option of the two choices.

The next step will be for the committee to put together a brief report on their decision and Map C for the Board of Aldermen to review. The Board could discuss during their work session on April 23, but Oxford’s chief operating officer Bart Robinson noted the agenda for the work session was getting full. The next time the Board could discuss the committee’s recommendation would be their regular meeting on May 7.

Another redistricting will take place in the next few years after the city receives data from next year’s census.