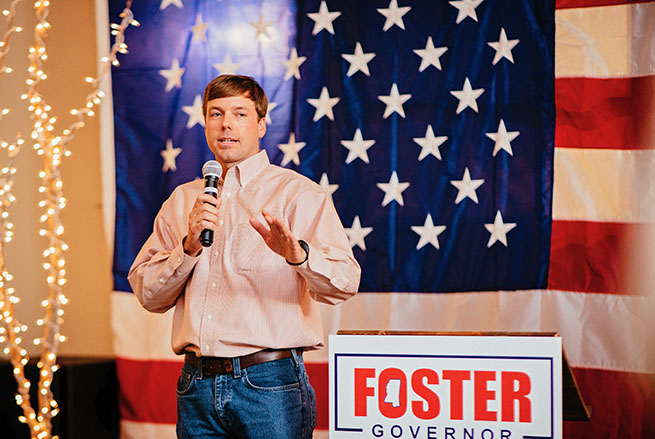 Robert Foster had every reason not to make the decision he did. Every instinct he had told him not to do it. The lack of political capital, the stress a decision like this puts on a family and even putting his livelihood on the backburner.

However, despite the factors at play, the Hernando native decided to announce his bid to become Mississippi’s next governor. In the end, it came down to how Foster would feel when he looks at himself in the mirror.

“All of that told me not to do it,” Foster said. “It was something I truly prayed deeply about for a long time. I felt a conviction to run because I didn’t feel like I would be able to sleep at night the rest of my life knowing that I could possibly help my state and I didn’t do anything about it, because I know way too much. I know how to fix it. Not only do I know what needs to be done to fix it, but I know how to get it done in Jackson.”

Everything Foster has seen over the last two-plus years in Jackson has been during his first-ever term as a state representative. Foster won an election in 2015 to be the next representative for District 28 when incumbent Tommy Taylor did not seek re-election. Foster defeated Les Green by nearly 1,000 votes in the Republican primary and subsequently won the seat as there was not a Democratic opponent for the general election.

Since sworn in as a freshman representative in 2016, Foster’s eyes have opened to how the politics in Mississippi work and wants to be the one to usher in change. Another stance Foster is taking with his campaign is being the candidate who has not made promises to people during his time in office.

Not asking for endorsements is one thing Foster made sure not to do while campaigning. If he receives support, he wants it to be for an organic reason, not because he shook someone’s hand and promised constituents something down the road for their vote.

“I’ve been down there long enough to see what the problems are,” Foster said. “Part of the problem we have in Mississippi is we’ve had this pecking order, per se. It’s climbing the political ladder for two decades to get in position to be next in line. The problem with that is when you get there, you’ve made a lot of promises and you owe a lot of favors, and it does not include helping the average Mississippians with things.”

Along with a fresh pair of eyes, Foster’s platform involves bolstering the workforce in Mississippi and finding ways to keep people here. Foster is attempting to do so by getting people out of the train of thought that college is the only path to a successful job. Additionally, he’d like to Implement vocational teachings in high schools once again and move classrooms away from the ‘script’ teachers follow in order to prepare students to take a test at the end of the school year.

“We’ve actually got a great location for industry and for recruitment of good-paying jobs because we’re centrally located in the United States,” Foster said. “We just need to reform education to get people ready to fill the work positions, which really revolves around more than anything getting away from this one track path of teaching everybody to go to college. There are only a small number of people that are ever going to go to college, and then there’s even a smaller number, as everybody knows, of positions available for people with a college degree.

What we need to get back to is the basics of teaching people how to work again and give them the skills they need in high school to be able to earn a living once they get out of high school. If we can do that, we can break the cycle of poverty for so many people. They just need hope.”

The challenge in front of Foster is steep, going against two of the more established names in Mississippi politics. During the Republican primary on Aug. 6, Foster is up against Lieutenant Governor Tate Reeves and Mississippi Supreme Court Justice Bill Waller.

At 36 years of age and barely three years of political experience, Foster believes he is the candidate Mississippi voters are ‘looking for,’ and this stage of his political career is the perfect time to run for the highest office in the state.

“It’s what I felt led to do at this point in my life for the reason of not owing any favors,” Foster said. “Not being in the system so long that I become part of the problem. That I can look at it from the outsider’s perspective but I have enough insider knowledge of how the system works to be able to get something done.”

Foster owns, and runs, Ceder Hill Farm in Hernando, a business started by his parents in 1996 before Foster and his wife took it over in 2005.