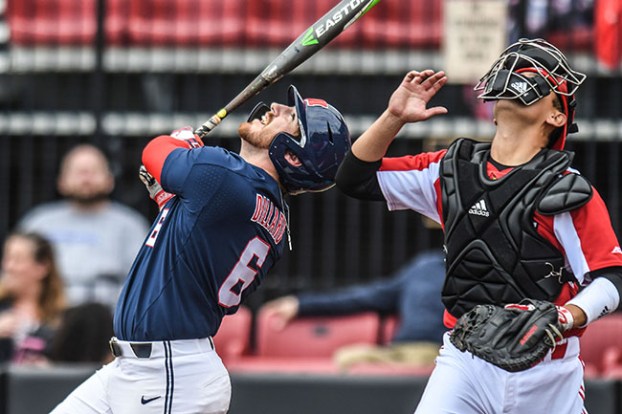 Ole Miss is coming off their best four game stretch of the season. They’ve been hot before, but then squandered the momentum mid-week. But not now.

Mike Bianco’s Rebels swept No. 21 Florida last weekend, following it up with a 11-2 win over Southern Mississippi on Tuesday.

There are no ‘easy’ weeks in SEC play, but if the Rebels have any relatively easy weekends remaining, it’s Kentucky this weekend. Of the remaining six weekends in conference play, Kentucky is the only team on the SEC schedule that is unranked by D1Baseball. Kentucky has won just two SEC games thus far and have been swept by both Texas A&M and LSU.

Here’s four things to keep an eye on as the Wildcats come to town to face the red-hot Rebels:

First Base: Numbers on the recent Rebel offensive explosion

Coming off their first 40-run series since 1957, Ole Miss hung another 11 runs on Tuesday. They’ve now scored double-digit runs in four games in a row and five of the last six games.

Ryan Olenek was clearly hurting after being tagged out at home in the seventh inning second game of last weekend’s doubleheader against Florida. At the time, it appeared to be the same issue as a spot where he was hit by a pitch earlier in the game. Olenek’s been hit by a shockingly-high 11 pitches this year.

Going into Tuesday’s game against Southern Mississippi, Olenek was a game-time decision, but Bianco and Co. decided to hold him out on precautionary reasons. They imagine the senior who’s hitting .389 will be available this weekend against Kentucky, but it’s something to monitor moving forward.

Third Base: What will the pitching rotation look like?

Ethridge left last Friday’s start early after re-aggravating a blister on his right middle finger. The last time this happened for Ethridge, he sat out the following week to let the finger heal. This week, it seems like he’s giving it a go.

For Sunday, most assumed the starter would be one of the two between Tyler Myers and Gunnar Hoglund. Then both pitched in relief on Tuesday against Southern Mississippi, opening questions. It seems like Houston Roth may be in line to start again for that third game, but time will tell.

At Bat: Can Thomas Dillard get his bat back?

I’m not sure anyone in the nation started 2019 as hot from the plate as Ole Miss left fielder Thomas Dillard. Through the opening fifteen games of the season, Dillard hit .434 with 19 RBIs. The next 15 games, starting with Louisville and going into conference play. Dillard hit just .226.

During the first two games against Florida, it looked like he may have gotten his mojo back, hitting six for seven. Then he went 0 for his last 6. Getting Dillard’s bat back to full speed, in the heart of the lineup, may be the key for Ole Miss to host a regional.

The first of three home games against Kentucky gets under way Friday at 6:30 p.m. Saturday’s game is televised on SEC Network, with the other two games being available to stream on SEC Network +.

OXFORD – In the first crosstown classic game of 2019, it was a Commodore freshman netting the go-ahead runs in... read more