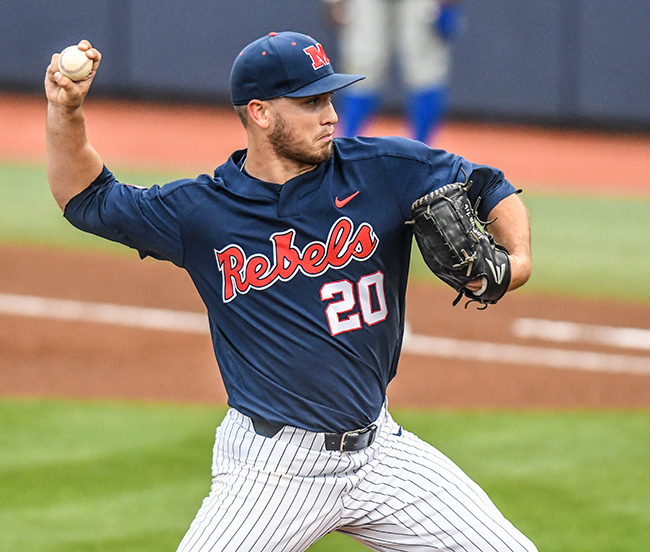 OXFORD – Nursing some soft, thin layers of skin on a throwing finger where he’s been dealing with blisters, Ole Miss’ starting pitcher Will Ethridge was electric Friday night. Despite not being 100-percent, the junior went seven scoreless innings as Ole Miss took game one from Kentucky by a final score of 8-2.

Ethridge had to leave last Friday night’s start against Florida early after reaggravating a blister on the middle finger of his throwing hand. Tonight, you would have never even known there was anything wrong.

He carried a perfect game into the fourth inning and would make it a full seven innings while throwing just 104 pitches. Ole Miss took him out after the seventh to control the damage to his finger on a night where he looked capable of going much, much longer.

“About the third inning, I realized they were swinging and missing a lot on my fastball,” Ethridge said. “I tried filling it up with that and then keeping them off balance with the curveball and changeup.”

The final line for Ethridge was his best all year at 7.0 innings, three hits, 11 strikeouts and no runs. The 11 strikeouts set a new career high, topping a 10-strikeout game from May of 2018. The seven, shutout innings lowered Ethridge’s ERA on the year to 1.76. He says the blister didn’t bother him tonight, but they’ll continue to rehab it over then next week.

“It was a really good fastball tonight. Especially early, I think the velocity might have bumped to 95 or so,” said head coach Mike Bianco. “Tonight was one of those nights where you say ‘they don’t always have their best stuff.’ But tonight he had his best stuff.”

Ole Miss’ offense got on the board early to help Ethridge, scoring three of their eight runs in the opening frame.  After intentionally walking Thomas Dillard and with Grae Kessinger standing at third, Cole Zabowski took Kentucky starter Jimmy Ramsey deep to left field for his eighth home run of the year. They’d add two more runs in the fifth and then one each in the sixth, seventh and eighth.

Junior shortstop Grae Kessinger remains red-hot after the Friday night game. He went 4-5 in this one, including his first home run of conference play. In his last ten games, Kessinger is hitting .524.

“I’m just staying aggressive. It’s having confidence, having a plan and sticking with it. If you’re swinging hard and seeing it well, usually it’s a good combination,” Kessinger said. “I just have so much confidence walking up to the plate right now. This game’s a lot of fun when it’s that way.”

With the win, the Rebels have won six straight SEC games. They’ll return to the diamond early on Saturday. The second game of the series has been moved up to 1 p.m. from the original night start, an attempt to avoid impending storms.