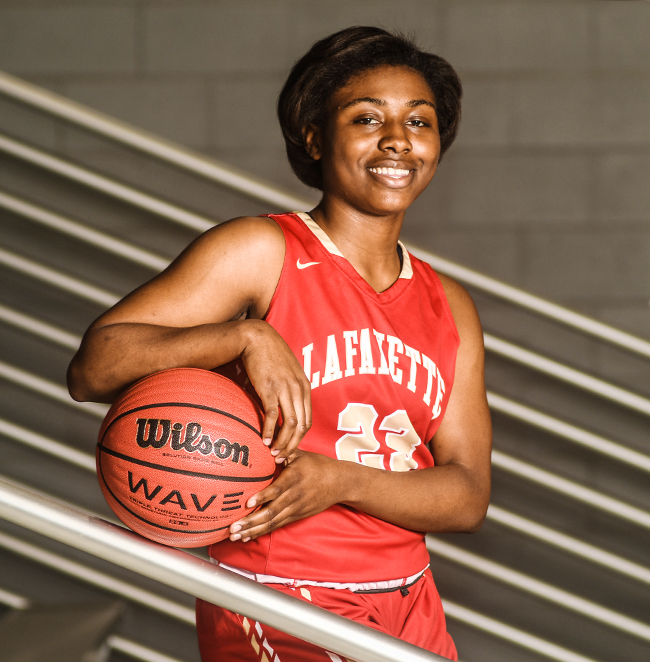 Shayne Linzy knew he had something special with Azariah Buford early.

Having just coached one full year at Lafayette, Linzy knew his team in 2016-17 could be special. He was just missing on small piece. As an eighth grader, Buford played ten games for the Commodores varsity team, but in her freshman year, she’d be asked to do a little more – start at point guard.

“She really showed great court vision when I was watching her in junior high. She was well-built to withstand varsity beatings already and she had good speed and she showed great speed,” Linzy said. “Going into her ninth-grade year, I knew that with the pieces we had, if I could find someone new to run the point that could open up other people to be more successful, we could be special.”

With a true freshman point guard, Lafayette went 30-3, winning the state championship by a commanding ten points. Linzy knew Buford was going to make mistakes as a freshman, but he liked the upside and knew that he could surround her by some special players.

“My freshman year I didn’t really have to do a lot. We had so many seniors that did the talking and led the team,” Buford said. “That all changed because I had to play lie the captain and the leader for the last two years. I’m kind of getting used to it.”

Is she actually used to it? It’s hard to tell. The first time I tried to talk to Buford I got just about nothing out of her. The second time was a little better, but certainly not good. Sitting in Shane Linzy’s office earlier this week, she was more open and thoughtful than I’ve ever seen her – there’s certainly, tangible growth.

Lafayette went 27-4 this year, a really impressive run for a team that lost one of its most important players, senior Xhiir Burgess, to a season-ending knee injury right before the season. A fantastic player down low, the loss of Burgess caused everyone to step up. For Burford, that meant being more of the vocal leader – a role Burgess did so well.

“She’s come out of her shell a little bit, but certainly not as much as I’d want as a coach,” joked Linzy. “But when she gets on that court, she’s all go. She’s played hurt and she’s played sick. She does it the right way in practice and then it translates into the games.”

Now a junior, Azariah Buford is Linzy’s second coach on the floor. She may not be vocal, but she leads by her example and her play. Contributing over 17 points and 7 rebounds helps too.

Linzy describes Buford as a pass-first point guard, yet she led the team in scoring this past year. She wants everyone around her to be successful and she wants to do her part in making that happen.

This year, Lafayette beat the 33-4 Ingomar Falcons twice. But it was the second game that really stood out to the Lafayette coach. Preparing for the Falcons in round two, Buford came to Linzy with a challenge.

“I always assign Molly Jones to guard who we consider the best offensive player on the other team. But Azariah came to me and said ‘I want her. I want to guard her,’” Linzy said. She knew what that game mean to us and she stepped up big time. I knew then that that girl is here to do whatever it took to win and that she’d sacrifice other parts of her game to make sure the team is successful.”

She’s made strides every year with the team. This year, it was improved shooting and a knowledge of how to use pace. Next year, Linzy said he’s challenged her to work more to control the team and rebound, as they’re going to be losing a lot of that interior depth to graduation.

Ashley Epps has played for Oxford for three years. One of the best pure athletes in the area – she’s one of the best hurdles in the state – Epps has always had the genetic skills to succeed. However, her coach said it’s been her shooting and basketball skills that needed to improve for her to get to the point where she was this year.

A point guard, Epps averaged 4.7 rebounds per game for the Chargers; that athleticism really helped her outrebound girls that were much bigger than her every game. But for her coach, as fun as that is to watch, a big part of her growth is just seeing her grow up.

“Her athleticism on the court is a huge advantage, but watching her develop not only basketball wise, but really her maturity as a young woman has been fun,” said Oxford head coach Cliff Ormon. “She really grew and took upon a leadership role this year, and we needed that.”

Kimaya Dixon is a guard in essence, but she’s also Lafayette’s most versatile player. Dixon can post up on offense and can guard a post. However, she can also run point guard and guard anyone on the perimeter. She can shoot the three ball and score down low.

This season, Dixon was a close second on the team in scoring to Buford, averaging over 15 points per game and over seven rebounds. Linzy has challenged her over the summer to extend her three-point shot, allowing her to open up her game offensively.

Kelsey Wilborn was the senior captain for an Oxford team that got a whole lot better this year. Like with Buford, Wilborn isn’t the most vocal leader, but it’s impossible for others on the Charger team to not latch on to her unrelenting effort.

“She’s not a very vocal leader. However, every single time she steps on the floor, 1000-percent of her energy went into both practices and games,” Ormon said. “I had to worry if she’s going to get hurt diving into the bleachers or onto the floor in practice. She was all-out, 100-percent at all times. That’s where her leadership came in; you never had to question her effort.”

Wilborn’s development was held back by a Lisfranc injury in her foot that caused her to miss all of her junior season. Bouncing back as a senior, she averaged a team high 11.3 points and 7.1 rebounds on a team that made a 11-win jump compared to the year before.

“Without those two, we never make the jump we did from four wins to winning 15. We’re still not where we want to be, but Kelsey and Ashely (Epps) set us on the right path,” Ormon said.

Lafayette’s loss of Xhiir Burgess challenged all of the Lady Commodores, but it hit Mariah Holland the most. Her fellow teammate in the post, Holland saw a lot more attention this year than she’s been used to, but was still incredibly effective.

“Things were tough on Mariah this year. Defenses were able to really box her in down low and concentrate more on her, knowing that Xhiir wasn’t there,” Linzy said. “She knew she had to do a little bit more this year, not having her partner down there with her.”

Linzy describes Holland as a blue-collar worker, one that will always give great effort no matter who the team is playing. That sort of effort opened things up for the problems she could create for teams from all the things she could do down low.

Holland led Lafayette in rebounds (8.1) and chipped in 9.5 points for the Lady Commodores. It’s that rebounding that the team will miss the most moving forward.

“She could shoot the ball outside and her hands always find the ball… I don’t know how she does it. There were several times every game where I’d look and thing ‘how did she get that rebound? She’s not supposed to get that. We’re going to miss that as a team.”

Additionally, Linzy is quick to credi Holland for always playing with a smile and being a positive and uplifting force for the team.

Rebels ride Ethridge’s best outing of the year to…