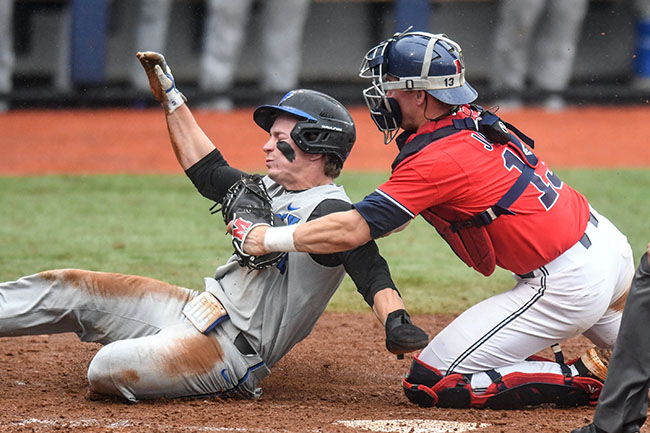 Mother Nature came down hard on Oxford Saturday, forcing Ole Miss’ Mike Bianco to reschedule Saturday’s game against Kentucky into a doubleheader on Sunday, something he likes to do just about as much as the NCAA likes paying players (bad joke, my apologies – but hey it’s a live ‘blog,’ not an AP-style story, so the joke’s on you).

The Diamond Rebels are set to play two, seven inning games on Sunday against 2-11 in the SEC Kentucky. In replacement of two, back-to-back, short game stories, follow along to the games here with a live blog that I’ll update periodically over the course of the afternoon.

Kentucky’s T.J. Collette took Doug Nikhazy deep to right center for the first run of a game. For what it’s worth, this is probably the most forgotten home run in college baseball history, as it happened while Tiger Woods was walking up the 18th fairway in route to his fifth green jacket.

An RBI-single from Coltyn Kessler scores a Kentucky baserunner to give them a 2-0 lead.

The wind is really blowing out hard here today at Swayze. Nikhazy gave up another HR – this time a 2-run shot – on a ball that would’ve otherwise been a pop up on a normal day. He’s replaced quickly by Tyler Myers – first time Doug Nikhazy has looked like a true freshman pitching in the SEC all year.

Nothing going for the Rebels offensively. Only five hits through the first six innings. Max Cioffi replaced Myers on the bound last inning.

Kevin Graham hits a solo shot home run in the bottom of the seventh for the only Ole Miss run of game one of the doubleheader. The loss snaps Ole Miss’ six-game conference win streak, dropping them to 9-5 in SEC play.

Game two of the doubleheader will start at approximately 4:25 p.m. Ole Miss’ starter for the second game is to be announced, but if I had to guess, Bianco is going to go with Gunnar Hoglund for game two.

It’s been a pitchers battle and a lot of early zeros between Ole Miss’ true freshman Gunnar Hoglund and Kentucky’s Zack Thompson, one of the best in the entire nation. Hoglund has struck out 4 of the first 6 batters without allowing a hit; Thompson’s only allowed hit was a double by Cole Zabowski in the right field gap.

Gunnar Hoglund was fantastic through three innings. He hit a Kentucky batter to open the fourth then allowed a one-out single to put runners at the corner with one out. Getting so close to working himself out of a jam, Hoglund struck out the next batter and got up 0-2 on T.J. Collett before Collette took him deep to right field for the lead.

Hoglund gave up one more run in the fifth when a Kentucky batter put a ball to the fence in left center that scored a runner from first. Rebel center fielder Ryan Olenek left the game after colliding with the ball on the play. Austin Miller replaces Hoglund and strikes out the final batter.

Grae Kessinger’s hot streak continues. With runners on the corners, Kessinger doubled down the left field line, scoring two runs on Kentucky’s ace. Kessinger has now reached base in 25 straight.

After walking Tyler Keenan with two outs, Kentucky struck out Thomas Dillard to end the inning.