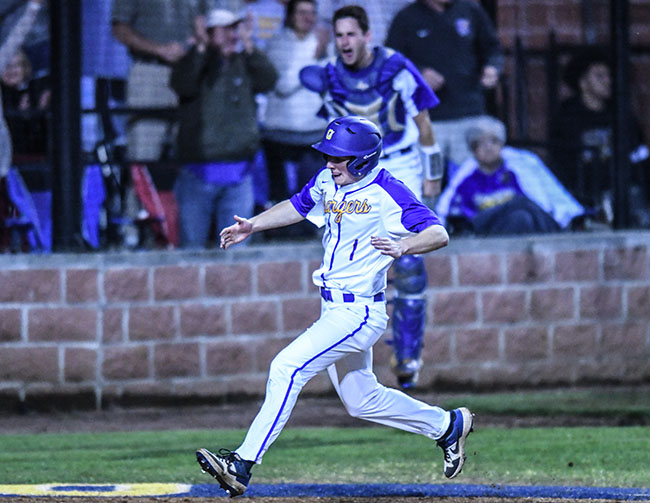 OXFORD – In their regular season finale on senior night, it was a sophomore raising his game in the biggest moments for Oxford.

The Chargers won their regular season finale Monday night against Tupelo 9-3, clinching the second spot in Region 2-6A and locking down the two-seed in the state playoffs out of the region.

“It was an all-around win. Great job on the mound and we played really, really well defensively,” said Oxford head coach Chris Baughman.

Their 2019 senior night, Oxford played six seniors on the night for their last regular season home game of their Charger career – Bo Gatlin, Cole Catalano, J.R. McClure, Clay Ivy, John Harvey and Riley Bennett. Five of the six either scored or drove in runs in the game.

“They’ve carried us, obviously. We’ve gotten some big-time performances from some young guys throughout the year. But (the seniors) have been a rock all year,” Baughman said. “They just did a great job of leading us tonight.”

Oxford bats struggled early behind the strong left arm of Tupelo’s Hunter Elliott. Elliott, a Golden Wave sophomore and Ole Miss baseball commit, struck out six of the first seven Chargers to come to the plate before getting pulled early after pitching just two innings.

Elliott was also responsible for the first early run in the game. He reached base on a single in the second inning, scoring on a single to right center field to put the Golden Wave up 1-0 early.

Nothing was going offensively for Oxford until the bottom of the fourth inning. Tupelo pitcher Peyton Puckett, brought in during the third inning to relieve Elliott, struggled with his command in the inning. Loading the bases for the Chargers, Puckett walked Oxford’s Eli Wicker before hitting both John Harvey and Lock Elliott.

With two outs and the bases loaded in a one run game, Oxford’s Hays Roth perfectly placed a ball in the right-center gap, clearing the bases for a 3-RBI single to give the Chargers their first lead of the game.

Where Oxford took the lead in the fourth, they broke it open and put it out of reach in the seventh. Capping a four-run inning was senior J.R. McClure, who’s single drove in the final two runs of inning to put Oxford up 7-1.

Allowing just three hits in his opening five innings on the mound, Hays Roth walked the Tupelo leadoff batter of the sixth before allowing a two-run homer to Payton Puckett to cut the lead to 7-3. A pair of beautiful defensive plays by McClure at third base and Catalano at second base allowed Roth to minimize damage to just two runs in the inning.

“Everything was working (for Roth). He established a changeup early and that gave Tupelo problems,” Baughman said. “They were out on their front foot a bit. But he battled in the zone. He did what he does.”

Oxford iced the game with two more runs of their own in the sixth inning. Freshman Dixon Webb closed the game for the Chargers with a hitless 1-2-3 inning.

With the win, Oxford finishes the regular season 16-9 (6-3 and 2nd place in Region 2-6A). The Chargers will face Greenville-Weston in the playoffs, starting home Friday night.