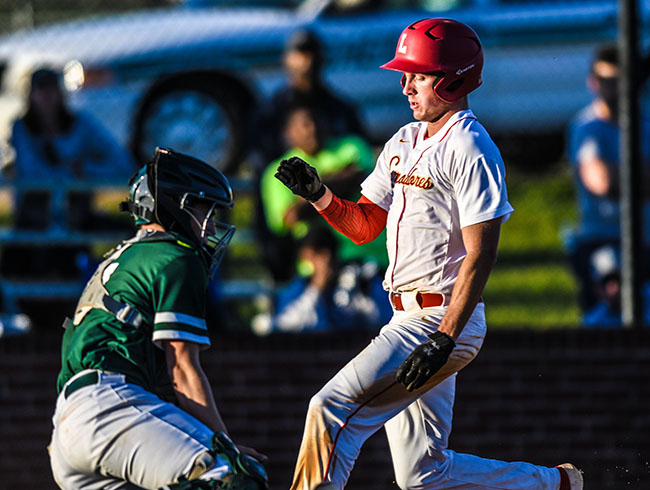 A 6-1 win over West Point wasn’t just a knock in the W column for the Commodores on Monday night. Getting to 6-3 in the Region, Lafayette baseball won their first Region 2 crown since making the jump to 5A, clinching a 1-seed in the playoffs in the process.

“It being our second year in 5A and my second year here, in theory you’d think we’re kind of ahead of schedule, but we believed this was something that we could accomplish,” said head coach John Walker. Every year our goal is to win the league. This group went from 4th place last year and we returned a lot of the guys on that team. Going from the outside lookin in to winning it, it’s a legit accomplishment.”

Walker described Monday’s game as a game they survived despite not playing their best baseball of the year. Starting pitcher Foster Westbrook “did enough and competed enough” to put up some zeros after giving up one run early. The Commodores left a lot of runners on base on the evening, but put up six runs, enough to clinch the league.

It’s truly a remarkable, one-year turnaround for the Commodores. Playing their first year in 5A baseball last season, Lafayette struggled tremendously. The Commodore program that had twice made it to the playoff semifinals this decade as a 4A school went 11-12 in their first 5A season, winning just two region games. Just one year later, Lafayette finished the season 14-9-1 and 6-3 in their region.

“We gained a lot of experience. Even with a fairly young lineup again this year, we still felt better having gone through it with these guys last year,” Walker said. “From a pitching standpoint, we were so much healthier this year than we were at any point last year.”

With the one-seed in the playoffs, Lafayette gets a first-round bye in the state playoffs. They’ll add an exhibition game with South Panola over the weekend just to stay sharp, but will play their second round playoff games starting next Thursday.