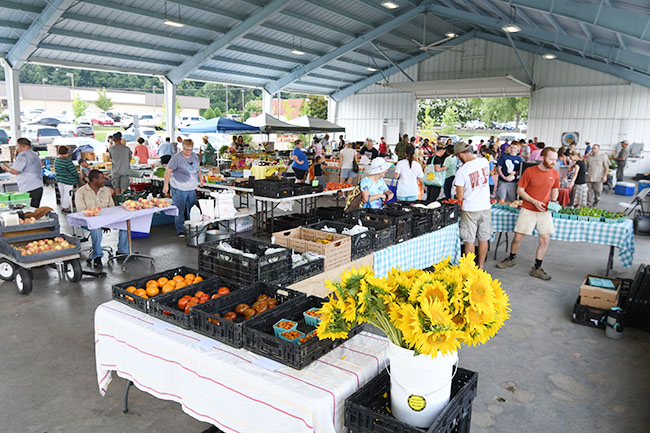 Spring is in full swing, and with it comes the season openings of farmer’s markets around the country. Next week, the Oxford Community Market will open its 2019 season as it ushers in its sixth year of providing fresh produce to Oxford and Lafayette County residents.

With the Midtown Market reserved for Saturdays, the Community Market organizers decided to host its market on Tuesdays.

“That decision was made prior to me becoming the market director, but I think [Tuesday] was a great choice,” Betsy Chapman said. “There are markets around the country that are run all through the week, a couple times a week. We sort of wanted to follow trends of markets who are opening mid-week, because people don’t just buy groceries on Saturdays.”

Chapman has been involved with the Community Market since its inception and took over as the director in 2014.

Several local farms participate in the market, including Yokna Bottoms Farm, one of the more notable farms in Lafayette County. Yokna Bottoms was hit hard with heavy rainfalls and flooding in February. The weather issues caused the farm to have a delayed start in building up its surplus for the year. Chapman, who once worked at Yokna Bottoms, said they will be there next week as well as several other regular participants.

“I think we’re going to be OK,” Chapman said. “Yokna, unfortunately, experienced that flooding, but luckily not everybody else did. From what I’m hearing from farmers is we’re going to have a pretty good selection.

On thing that I’ve seen grow over the years is people sort of think that Mississippi farmers’ markets are tomato season only and the markets start when tomatoes come in and end when tomatoes are done. This is not true. We have a really long growing season and more farmers are starting to capitalize on that and producing these early crops. So, there will be a ton of cool-season crops.”

During the Market’s opening day, a Friends of the Market Happy Hour will take place from 5 to 6:30 p.m. There will be artist cocktails and food from Chicory Market, Little Easy Catering, Tallahatchie Gourmet and other local restaurants. Spencer Tomas & Kell Kellum of Young Valley