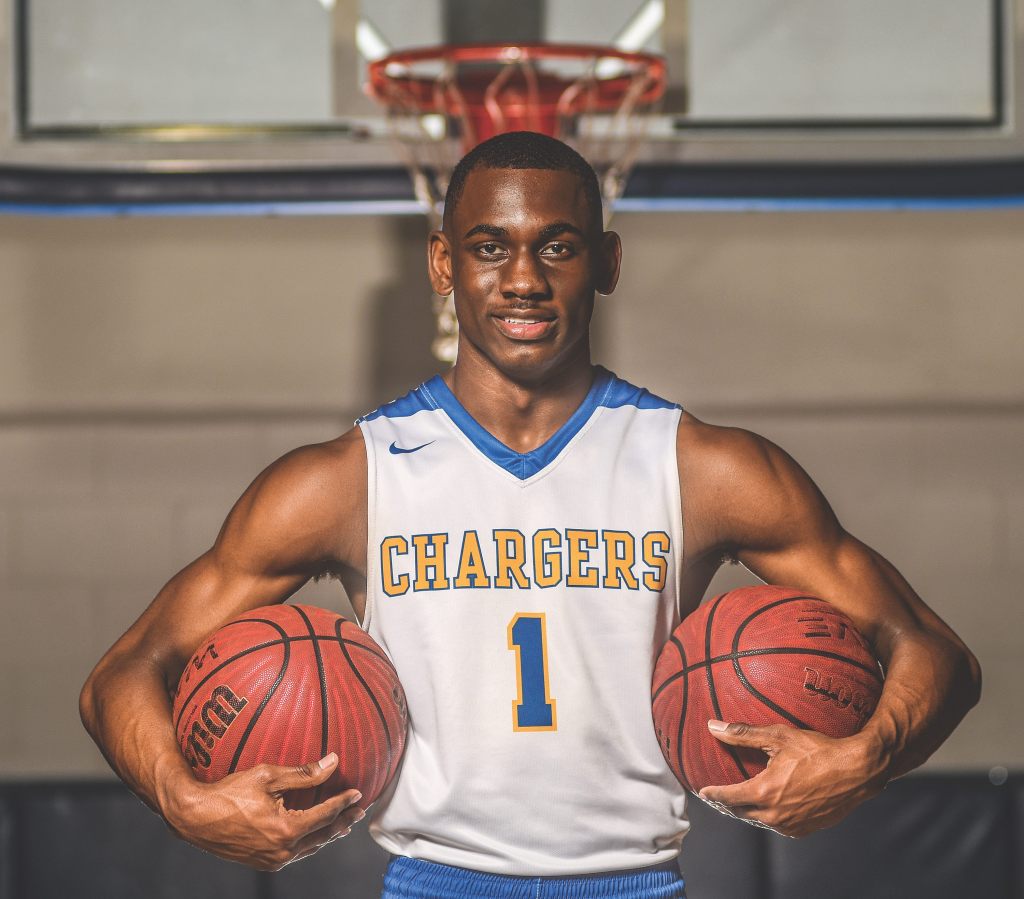 Kylan Blackmon has played varsity basketball at Oxford since his freshman year. He’s used to the grind and wear and physicality of 6A basketball, but in no way was he used to it on this level.

Getting the invite to play on the Mississippi North Boys All-Star Team shouldn’t have been a surprise for the junior after a season in which he led the Chargers to a tone of 17 points, 4.7 rebounds and 3.5 assists. But he may have been surprised with just how well he played at that next level.

Oxford needed players to step up this year, and Kylan Blackmon sure made the sophomore to junior leap for the Chargers. Blackmon improved by nearly ten points going from his 10th grade to 11th grade season, transitioning from a role of a set-up man to being ‘the’ man. He may have had the body, but he didn’t have the confidence and skill he’s playing with now.

“He’s a year older and a year stronger and he did a good job playing off the bounce more and off the dribble,” said his head coach, Drew Tyler, speaking on how his game changed year-to-year. “Kylan was more in attack mode, so he got to the free throw line more. He was just around the goal all the time.”

Blackmon was named the MVP of the North team during the South All-Star Game last month in Clinton. He scored 14 points and brought in four rebounds in the game, shooting four for five from long range.

“It was a great experience playing with other kids my age that are really good themselves. All of us potentially have a chance to play college basketball,” Blackmon said. “Everybody at that level can play with you. All of those guys can play defense.”

Games like that are critical in development, especially for a kid looking to catch the eyes of colleges as he makes the next leap into senior year.

“That game was so fast and so intense and played so high above the rim that he knows if he’s wanting to play after high school, he needs to fit that mold,” Tyler said.

That game really set off a spark plug in the soon-to-be senior. Tyler says Blackmon has been in the weight room constantly since the end of the season, hardly giving himself a break from the conclusion of their playoff run in Starkville.

Tyler believes Blackmon has already gotten a good deal stronger since last year ended, that he’s all-go in practice and has really taken on a different mindset going into his final year at Oxford. Blackmon says his offseason focus has been getting quicker and stronger, trying to boost that athleticism for him to be able to become a better defender on the wing his final year.

“He’s at game intensity all the time. He’s got a new focus – it’s more business-like with the drills and the weight room,” Tyler said. It’s a whole different approach. It’s a mature approach to where he wants his game to be his senior year of high school and to try to continue to play into college.”

Oxford never really needed Kylan Blackmon to lead. Not until this past year. Playing as a sophomore, he was more reserved and submitted to the seniors to lead the team. As a junior, he may not have been the most vocal Charger, but he led the team in the way he played. His leadership is exceptional, both on and off the court – coach called him a “great face for the program.” With Kylan, as his game has grown, so has his confidence and his ability to lead and carry the team.

“As a sophomore I didn’t really have to do a lot because we had those seniors to lead us. Going into my junior year, I really knew we had to be more of a leader,” Blackmon said. “We only had two seniors this last year and neither had a lot of experience. Me having a lot of experience, I had to be that guy to be the leader and maybe tell guys what they’re doing wrong at times.”

Tyler gave his all-things-considered senior two challenges going into his last offseason as a charger. Firstly, to find a way to be consistent in a higher gear, and play with an attacking mindset. This skill showed its head at times in the junior campaign, but it’s something the coaches would like to see more consistently.

Secondly, they want him to work on going left as well as he goes right. The coaches believe his left hand has already gotten significantly better over the past twelve months, but the next few months should bring Blackmon to a point where it feels natural to go either direction.

Blackmon himself has taken these two directives and added one more of his own: he wants to take that time spent in the weight room and become a lockdown defender.

Another Charger – this time, their floor general. His head coach describes Pearson as a kid that simply loves playing basketball, but one still with a lot to learn.

Byron Pearson led Oxford in assists (6.1) from the point guard spot, and is improving in his ability to see the floor. The coach likes the way he can be a second coach on the floor, seeing things other guys don’t. Learning to control pace of the game is still a work-in-progress for the rising senior.

“You can’t just be at 100 miles an hour as a point guard, and you can’t be at zero,” Tyler said. “That’s where we’ve come through to Byron.”

Pearson is still learning that ability to pick his spots. It’s a work in progress, as it is for many young guards, especially those playing with talented guys around him.

For better or worse, Oxford’s coaching staff puts a lot on the plate of their point guards – as do (and should) a lot of basketball teams. Improving that ability to command the team from the top could lead to Pearson having a big-time final year as a Charger.

“It doesn’t matter what goes right or wrong, we coach through the point guard, and he’s our point guard,” Tyler said. “He’s our quarterback on the floor and we’re coaching through him. We feel like he’s going to have a heck of a senior year here.”

Tykel Owens is simply a superb athlete. Pair it with a guy who Tyler describes as the team’s hardest worker, and you have the recipe for a really good basketball player.

“He would come early and stay late. He never lacked hours in the gym – he was in there 24/7,” Tyler said. “He sets the tone with intensity for us.”

For Owens, the athleticism is never in question, it’s the basketball specifics. Like Blackmon, he made a massive statistical jump this year to average 15.4 points and 5.5 rebounds for the Chargers, but his shot could still use some work to develop him into the player that Oxford believes he can be as a senior.

The 2018-19 season was a bit of a slog for the Lafayette boys. Winning only five games on the season, there weren’t a ton of positives for the Commodores. One thing they’ll be able to look back and draw on from the season is the emergence of a few young players into the contributing mix, among them 6-foot-4 sophomore Tylen Kinds.

Just a sophomore, Kinds led his team in both points (7.4) and rebounds (5.4) on the year and was tied for third in assists. In one of the team’s best games of the season, a 60-58 win over South Panola, Kinds put together a line of 16 points and 11 rebounds. There’s only room for improvement for Kinds and the young Commodore team.

J.J. Pegues’ last memories of the 2018-19 season come with a bit of mixed emotions. Pegues played, by far, his best game of the season in the playoff quarterfinals at Starkville, be it in a loss.

Pegues carried the Oxford team for much of the 79-65 loss, keeping the team in it for stretches with his preposterously hot outside shooting. For a 260-pound forward, being able to stretch and hit a three-pointer can be a huge asset – in Starkville he hit eight of them.

“He’s got a really good-looking shot, a soft shot. I’ll pull him away from the goal or if we think it’s advantageous to use him in the paint, we’ll do that,” Tyler said. “He can score on the perimeter or down low.”

His size is already a big mismatch for teams down low. He may give up height to many of the forwards he plays, but few of them have his size and footwork combination.

A dual-sport kid, basketball isn’t even Pegues’ best sport. He’s a four-star athlete in football with offers to play at Ole Miss and Alabama. But it’s his competitiveness and love of the game that allows him to exceed at just about every spot on the floor for Oxford, from the three-point line to battling in the post.