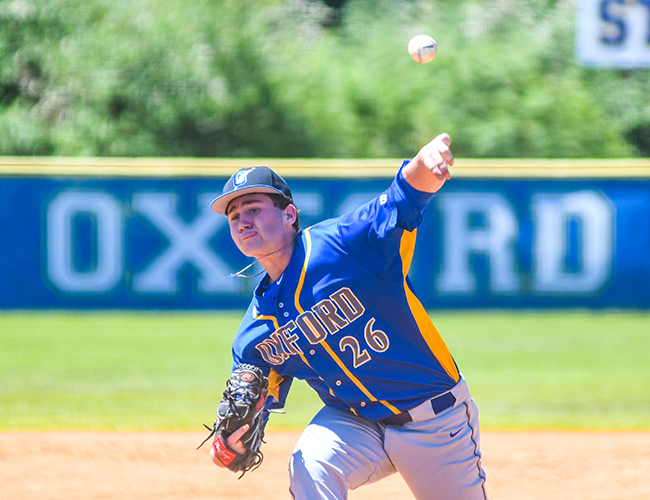 OXFORD – Playoff baseball is back in Oxford. Playing a doubleheader with Greenville in their opening round games, the Oxford Chargers were dominant. Oxford swept Greenville in two games, winning game one 17-3 before taking game two 19-2, capping a fantastic opening weekend for the Chargers at home.

It was evident early that Greenville was overmatched, something that played out in back-to-back games called on shortened runs-rules in the fifth inning.

The first inning of play Saturday set the tone for the entire doubleheader.

Oxford jumped on top of the Hornets early in game one and never looked back. Eli Wicker struck out two in the top of the first before the Charger offense put up four in the first frame to get the game going. Hays Roth’s two RBI single brought in Wicker and Clay Ivy to end the scoring in that first inning.

The Chargers were far from done.

After putting up a zero in the second, Oxford scored enough in the third inning to get the game called early on runs. Oxford scored 13 runs in the third inning. In the process, they sent 19 batters to the plate in the inning, batting around twice. Every single Charger starter not only reached base but scored a run, allowing them to get playing time for 11 guys off the bench.

“It’s good to get them in a ball game, in a playoff game, because they’ll be the guys we rely on next year,” said Oxford head coach Chris Baughman. “No matter what kind of game it is, it’s always good to get those young kids in – it means you’re doing something right.”

Eli Wicker pitched a great game for the Chargers in game one. Holding Greenville scoreless through three innings, he allowed just four hits in the innings-shortened game. Wicker struck out nine in five innings behind a fastball he was locating really well and a swing-and-miss curve.

Oxford didn’t take any time to get back in their groove in game two. Picking up right where they left things, the Chargers tagged eight runs in the first inning of game two to get up early. Like the first game, this one ended 19-2 in five innings.

Another two-RBI hit by Roth and a 2-RBI double from Sam Bianco did the majority of the work for Oxford in the first. They tagged on one-run in both the second and third inning before exploding for nine runs in the fourth inning.

On the mound for Oxford in game two was Owen Bruce. Going 4.1 innings on the night, Bruce remains undefeated in starts for the Chargers on the mound.

“We pitched pretty well. Eli was good early and Owen was good early,” Baughman said. “They threw their off-speed pitches well enough to keep those guys off-balance and they let us make plays behind them.”

With the series win, the Chargers will now play 1-seed Madison Central in the second round.

“They’ll be Madison Central. They’re a big-time powerhouse; they run 6A baseball with DeSoto Central and Oak Grove,” Baughman said. “We’re lucky to have the opportunity to play another series against them. And they’ll have a little revenge factor after what happened last year”

What happened last year was little bit of an upset for a team playing their first season of 6A baseball. Oxford (21-8) took down a 24-6 Madison Central team in the third round of the 2018 6A playoffs. Oxford fell behind in the series before winning two straight (the clincher in extra innings) to take the series.

The Chargers and Jaguars will start their series on Thursday.