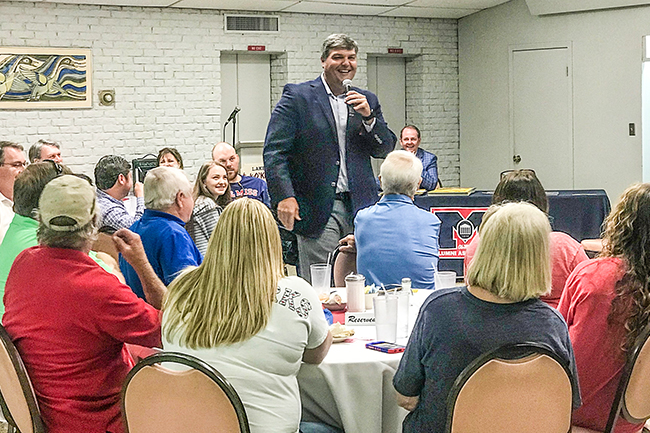 Ole Miss football head coach Matt Luke talks to the crowd during their stop in Louisville at Lake Tiak-O’Khata as part of the Rebel Road Trip on Wednesday, April 17, 2019. (Jake Thompson, Oxford Eagle)

As Matt Luke stands in front of a crowd of about 120 people inside the Lake Tiak-O’Khata resort, a beaming smile takes over his face. That smile is because all week the Ole Miss football head coach has been able to talk about the future of his program without any mention of the NCAA investigation, bowl bans or scholarship reductions.

The 2019 edition of the Rebel Road Trip was all about looking forward in the Ole Miss athletic program, a message conveyed by Luke, Ole Miss basketball coaches Kermit Davis and Yolette McPhee McCuin as well as Ross Bjork.

None enjoyed leaving the events of the past five years behind them more than Luke as he met with the Ole Miss faithful during their six-day tour that stretched across cities and towns in Georgia, Tennessee, Texas and Mississippi.

“Instead of talking about doubt and uncertainty, just talking about the things we are certain about,” Luke said of what his message has been during the road trip. “I talked a little about my vision of the program, talked a little about the recruiting class and being at 85 scholarships for the first time. Talked about signing 19 kids from Mississippi.”

The EAGLE spent a day on the road and was granted access to the road trip’s stops in Louisville and Tupelo on Wednesday. Over the course of a massive fan event such as the Rebel Road Trip, the logistics can be grueling, some days having as many as three stops in three separate towns.

Wednesday was a landmark day for Bjork, as it marked his seven-year anniversary as Ole Miss’ athletics director. It has been a tumultuous tenure for Bjork to say the least. Four months into the job, the NCAA took up residence in Oxford and stayed until November of last year. This spring has been the first time since 2012 Bjork has been able to lead without restrictions or anyone from Indianapolis keeping a close eye on his program.

“Every year is a new year and this time of year we can kind of turn the page, especially for football and basketball,” Bjork said. “You sort of hit the reset button. …There’s still work to be done, but the ingredients are there and we’ve made the commitment. Now, we’re just asking people to make the commitment. It’s a whole new perspective, there’s no question about it, between the past three Rebel Road Trips.”

As for the coaches, they kept the meat of their messages the same, ironing out the highlights and what plays well with the audience. During Luke’s speech, he makes sure to mention new defensive coordinator Mike MacIntyre and how he has the defense lining up in the right spot.

“Whenever I say that, people start clapping,” Luke said with that same smile from inside the bus in between stops.

What a difference a year makes, and none can appreciate that clichéd expression more than McCuin, or as she has affectionately been dubbed ‘Coach Yo.’ On April 4, 2018, McCuin was announced as the newest head coach for the women’s basketball program, and 18 days later, she piled up in the bus with Luke and Davis to meet her new fan base. Last year’s road trip was all about introducing herself — McCuin even missed a good portion of the trip while she was working to put a roster together — but this year, McCuin had a full season to sell to the crowds.

Bjork served as the opening act, warming up the crowd and speaking of season ticket sales, which he noted is a few thousand short of where they would like to be. Once he gave his speech, something that had a much lighter tone than the one given during his town hall series in February, Bjork introduced McCuin.

This year’s setup resembled that of a stand up comedy show, in the sense Bjork was the club emcee getting the crowd ready then pitching it to the next act. McCuin loves these moments of speaking to a crowd and knows what it is they are looking for, giving them nothing more or nothing less in her 5 to 10 minute set. She ends it with a funny story when legendary Ole Miss coach Van Chancellor called McCuin following the Lady Rebels’ win over No. 16 Kentucky this season.

“It was just a blur (last year),” McCuin said. “Everything happened so quick. …(This year has) been great. I’m surprised because they’re way more knowledgeable about the situation I walked into and the task I have at hand. For me, (the fans) have been incredible. I’ve been short and sweet and I hit them with a few punch lines.”

Wednesday’s stops were the most personal for Davis. Growing up just miles from Louisville brought back memories and Davis made sure to mention that win over Mississippi State up the road in Starkville on that February Saturday, to the crowd’s delight. When the caravan arrived to Tupelo, his father, Kermit Sr., greeted Davis, and the Davis family had a table up front for the evening’s event.

Much like McCuin, this year’s road trip provided Davis the opportunity to do more than just sell himself to the fan base. Davis had a few more weeks of on the job experience than McCuin, as he was hired last March, but still did not have a body of work to show. This year, Davis did have that body of work, including an SEC Coach of the Year title and a trip to the NCAA Tournament.

“Everybody was great last year, but I think it was just they got a chance to really see our team,” Davis said. “It’s been really good just how much appreciation of the way our team played and kind of exceeding expectations. …Last year they were just going back and watching (my teams) at Middle Tennessee. This year, they have a tangible thing. They’ve seen us play. I think they enjoyed that, even some of the tough losses.”

The road trip wrapped up in Oxford with a breakfast event inside The Pavilion on Friday morning. They will visit Washington D.C., Memphis and Jackson this summer.