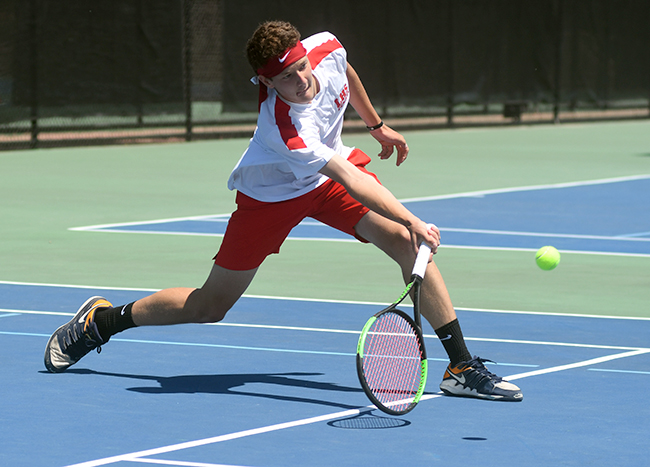 OXFORD – It came down to a tiebreaker and a pair of freshman.

For the second straight year, Lafayette tennis will be playing in the state championship game. The Commodores took down Lewisburg Monday afternoon in the playoff North-Half final by a score of 4-3, needing to come back late to do so.

Lafayette was down 2-3, before their No. 2 doubles paring of Barrett Childers and William Smith dropped their second set, leading to a tiebreaker. Childers and Smith won the tiebreak easily to tie up the series.

It all came down to Valerie Smith and Hudson Lindsay, two freshman playing no. 1 doubles in their first year of varsity tennis. Smith and Lindsay pulled out two close sets, winning 7-5, 7-5 to push the Commodores into the state championship.

“I’m playing with almost half a new team. That’s impressive for my young guys and girls that came through in tough spots,” said head coach Debbie Swindoll. “But I’m playing with some key cogs that have been in the fire. Allie (Bowen), Dawson Welch, Barrett (Childress), they’re pulling their courts. But the new people are stepping up.”

Lafayette is replacing five starters from last year’s squad. Smith and Lindsay are two of those filling that new gap.

Other winners for the Commodores on the day were Allie Bowen, Dawson Welch and Sam Case. Bowen won girls singles easily while Welch and Case did the same with the No. 1 boys doubles. Neither surrendered a single game.

“It’s exciting. It’s nerve wracking. We won this one by the hair of our chin,” Swindoll said. “But you know what? We did it. It’s truly great for the program.”

Playing at Parham Bridges Friday in the final and could see a familiar opponent. One of the two schools playing in the south-half final is Stone County. Oxford beat Stone County nine years in a row when they were a 5A school. Last year, Lafayette upset them 4-3 to win the program’s first 5A tennis championship.