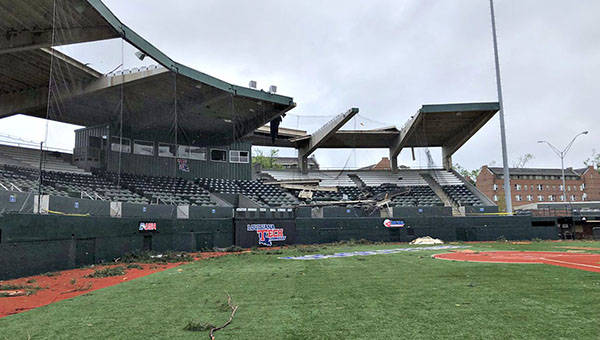 McClelland put an initial estimate of the cost of the destruction in the “millions” of dollars.

“It’s devastating. It’s a total rebuild for us,” McClelland said.

The softball and soccer stadiums took the brunt of the storm.

At the softball complex, the outfield fence was demolished and the scoreboard had a hole ripped through it. The bullpen along the right field fence and batting cages behind the home dugout were destroyed. Trees fell onto the stands and on top of the press box, and multiple light poles snapped and were lying on the artificial turf.

Fencing around the tennis courts is mostly gone, while the courts themselves suffered damage from falling debris.

The baseball stadium, J.C. Love Field, also suffered major damage. One portion of the concrete grandstand roof behind home plate had collapsed into the seats below, and another part was lying in a street outside the stadium.

Most of the outfield fence was missing and tree limbs were scattered all over the field. In center and right field, entire trees were lying on the ground.

“We lost our stadium and some other facilities last night. Some people lost their lives and businesses. We can play ball anywhere,” Louisiana Tech baseball head coach Lane Burroughs posted on Twitter.

Louisiana Tech’s baseball team is scheduled to begin a three-game series on the road against Rice Friday in Houston. It only has three more home games — a series against Western Kentucky May 10-12 — left in the regular season.

In a statement earlier Thursday, McClelland said the Western Kentucky series could be moved to Ruston High School.

Louisiana Tech’s softball team is scheduled to host Western Kentucky this weekend for its final Conference USA home series of the season, but university officials said Thursday that will not happen. No alternate plan was announced.

The tennis team has concluded its season, and the track and field team does not have any home meets scheduled.

In a statement released earlier Thursday, McClelland indicated that none of the facilities will be ready to play at again this year, and possibly not in 2020 either.

“Long-term for us, we got to look at what do we do? How do we rebuild the right way?” McClelland said. “It’s difficult to say if we had the money appropriated right now for these facilities, I don’t know if we have them built in nine months. That begins the question of we need to be preparing ourselves for the fact that we might not play softball, baseball, certainly soccer at these facilities for next year.”

National Weather Service hydrologist C.S. Ross said the tornado hit Ruston at 1:50 a.m. It was part of a line of “continuous damage” that stretched about 150 miles from Texas into Louisiana, he said.

Officials will use satellite data to determine whether it was a single tornado that ripped through the entire area, although Ross said that does not appear likely.

The National Weather Service said on Twitter that the tornado that hit Ruston was an EF3, meaning it had winds of at least 136 mph.

A mother and son were killed when a tree fell on their home in Ruston overnight, officials said. No injuries or deaths were reported on the Louisiana Tech campus, although the damaged athletic facilities are located near several dormitories.

The four-year university has about 12,000 students.

“Unfortunately in our community, we did have two deaths and our hearts and prayers go out to those people,” McClelland said in his statement. “But when you see the path of this storm and realize it took out the baseball wall, and 40 feet next to it is a dorm where other than windows breaking out or awnings gone, there was not total destruction. It could’ve been that way. It could’ve been a far worse deal.

“You can’t replace people’s lives, but you can build and replace athletic facilities and that’s what we intend to do,” McClelland said.