American Aquarium returns to the familiar confines of Oxford 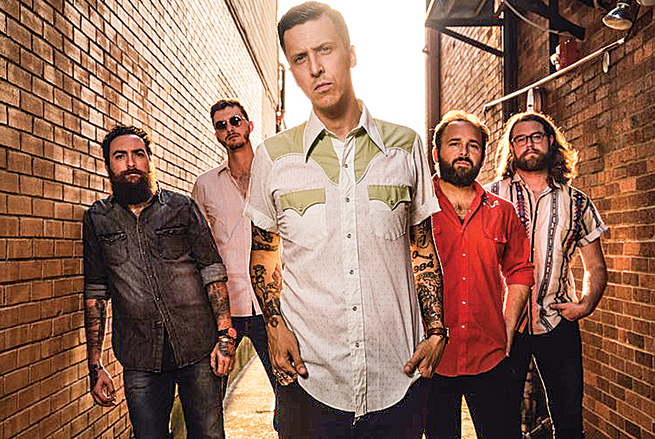 American Aquarium returns to Oxford for a show at Proud Larry's on April 29. (Photo by Cameron Gott)

Whenever BJ Barham embarks on a solo tour or hits the road with his band, American Aquarium, there is nearly always a stop in Oxford earmarked. The town located in north Mississippi has a special place in his heart. Whether it is the small-town charm, the plethora of options on the Downtown Square or because Oxford is where he recorded one of the band’s 10 albums, Barharm always enjoys his time here.

This time, Barham is bringing his band with him.American Aquarium will play at Proud Larry’s on Monday as part of their current spring tour. This leg began last Friday with stops in Knoxville, Tennessee; Baltimore, New York City and Philadelphia already in the books. Stops in Charlottesville, Virginia; Wilkesboro, North Carolina and Tuscaloosa, Alabama will be made before the tour bus arrives in Oxford, but Barham is thrilled to be back.

Over the last 15 years, the rock and Americana band has booked a show in Oxford at least once a year.

“It’s the venue, it’s the people and, obviously there’s the university that brings kids in every four years, but Oxford also has this really great townie scene,” Barham said. “Oxford isn’t just about Proud Larry’s. It’s the people. It’s the town itself. As a band on tour it has everything you could possibly want. You can stop by Square Books and stock up for something to read on the road. You can go to Ajax and get comfort food. We always try to stay around the Square just so the boys can kind of immerse themselves that close proximity downtown that Oxford has.”

Barham started American Aquarium inside his dorm room in 2006 and has spent the last 13 years writing, recording, touring and honing his craft while building a fan base along the way. Whenever a new tour is mapped out, Mississippi is usually one of the states on the list. Oxford is nearly a guarantee but sometimes, like this current tour, there will be a stop in Jackson. They will play at Martin’s in the capital city on Tuesday.

Proud Larry’s is always where Barham plays. Having spent several shows in large venues all around the world, there is something about the smaller venues that provides that intimate setting singers and songwriters like Barham enjoy coming back to.

In 2010, Barham and his band lived in Oxford for around a month and cut their record ‘Small Town Hymns’ at Tweed Studios.

“You can go to L.A., New York, Nashville, Austin and make records, but there is something about the seclusion, I think, of middle of nowhere Mississippi,” Barham said. “You can’t lose focus as easy. In New York there seems like there’s always a distraction to not create your art, to make an excuse to go see stuff and go out with your friends. In Oxford, our take on it was, when we were there we were there to work. So we’d wake up in the morning and we would work on the record all day, and don’t get me wrong, we’d cut loose on the Square every night. During the day there’s not as much distraction.”

Barham and his band is currently on tour in support of their 2018 album ‘Things Change.’ Despite releasing a record less than 12 months ago and constantly touring, Barham is already writing and working on new music for when they get back in the recording studio this summer to begin work on their 11th album.

Aquarium America’s show at Proud Larry’s will begin at 9 p.m. on Monday and tickets cost $15. Joshua Ray Walker will be the opening act.meri