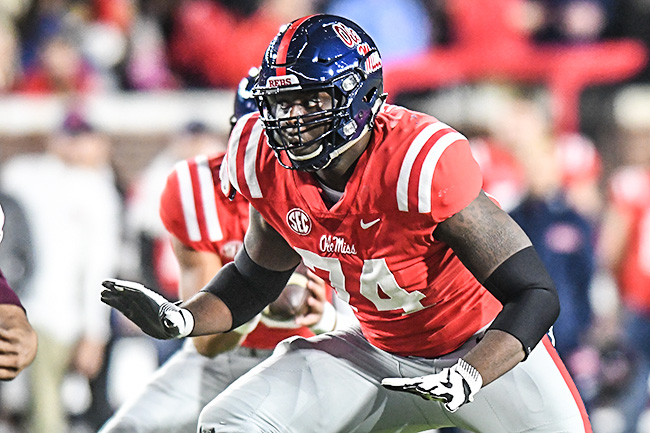 From high school superstar to collegiate All-American at Ole Miss, Greg Little’s ride is just getting started. The Carolina Panthers selected the Ole Miss left tackle with the 37 pick in the 2019 NFL Draft, completing the culmination of a highly touted recruit to a three-year college starter. Greg Little is off to Charlotte.

Greg Little was one of the more volatile of the Ole Miss draft prospects. Going into Thursday night, some were projecting Little as a first rounder and others thought he could potentially fall all the way to the third. For Little, the surprise is now over.

“He’s got some flaws. His hands can get a little bit wide at times. He’s not always square. There’s a little bit of stiffness. But you’ve got size, you’ve got somebody that can move people,” said NFL Network draft analyst Daniel Jeremiah. “He’s got a real good anchor in pass protection, which you love, and he’s pretty good in the pull game. There’s things to like about him.”

Little will fit in well with a Carolina team that’s lacked a left tackle for years. The Panthers even traded up into the round to get him.

People have known Greg Little is very, very good at playing football for quite some time now. Coming out of high school, Little was the top rated high-school player in the state of Texas and the No. 2 overall recruit according to ESPN. He blocked for No. 1 overall pick Kyler Murray as a high schooler at Allen, Texas.

At Ole Miss, Little got on the field almost right away. As a true freshman, he saw the field in every single game, making five starts at left tackle. He then went on to start literally every possible game for the rest of his Rebel career at left tackle.

High school recruiting rankings and projections are often, to no one’s fault, flawed. It’s not all that common for a guy who’s a top-recruit completely pan out as planned. Greg Little did just that, and now he’s a Panther.