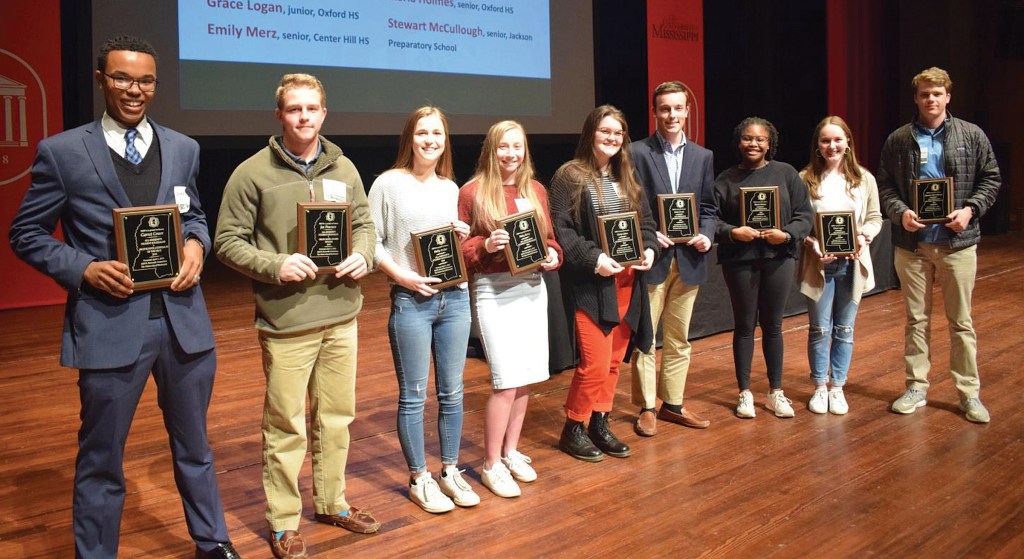 High school journalists, from left, Garrett Grove, Joe Pearson, Molly Archer, Haley Berry, Livvy Cohen, Gene Crunk, Klaria Holmes, Grace Logan and Stewart McCullough were among the students honored by the Mississippi Press Association with its first All-Mississippi distinction. The honors were announced at the association's annual convention and were headlined by Grove being named Mississippi High School Journalist of the Year and Pearson being named the Orley Hood Sports Journalist of the Year. (Larry Agostinelli|Division of Outreach and Continuing Education)

Earlier this month, Oxford High School’s journalism department once again solidified itself as the state’s top student newspaper. For the third straight year, Oxford’s newspaper ‘The Charger’ was named the best newspaper in Mississippi at the Mississippi Scholastic Press Association spring award ceremony.

The ceremony was part of the MSPA’s spring convention held at Ole Miss on April 1.

“I think we’ve taken a lot more risks in what we’ve been able to write and I think that’s paid off,”Livvy Cohen said. “Hopefully, people trust us more than just a high school newspaper.

Cohen, along with Molly Archer, have been co-editors of ‘The Charger’ for the past two years and have helped usher in the more in-depth approach the paper has taken. The change in direction came when Diala Chaney came to OHS from Oxford Middle School where she was teaching English.

Fruits of that labor came when Oxford’s Anna Barrett won the depth reporting category with her story ‘”Books Not Bullets”: One year after Parkland shooting, changes continue at OHS,’ which talks about how high schools such as Oxford have taken more precautions and put safety measures in place following the shooting where 17 students lost their lives at a Florida high school last year. The story ran in the January edition of ‘The Charger.’

In the three years that Chaney has been involved, the paper has seen itself become a more mature publication on the same level as some local newspapers found around the state. Leading an award-winning newspaper has not gone unnoticed. Chaney was named Newspaper Adviser of the Year at the ceremony.

“I think the caliber and level of students that we have at this high school, you can’t really compare them to anyone else,” Chaney said. “They’re so smart and so driven and so opinionated and motivated. Just the fact that the school district gives them the leeway to write what they want to write about and talk about real subjects and real things that are happening in their lives and affecting them. I think they appreciate that and they put in the due diligence and they do the research and they take the time to put out a good product.”

During the ceremony, 10 students were named All-State Honorees and Oxford had four of their students named. Archer, Cohen, Klaira Holmes and Grace Logan earned the recognition. St. Joseph Catholic School had two students win the Mississippi High School Journalist of the Year and the Orley Hood Award for Excellence in Sports Journalism.

While taking home the top honor and having several individual accolades, The Charger did not snag all the awards they have in the past. The paper’s success and grip over the state’s high school journalism scene has encouraged other papers to improve their publications and catch up to Oxford.

“That kind of let us kind of get comfortable where we were and not really reach for the stars as much as we used to,” Cohen said. “But, seeing how everyone is taking inspiration from our past issues this year, I think it is going to push (next year’s staff) to go the extra mile with what they do.”

Cohen is graduating next month and plans to go to Rhodes College in Memphis and will major in international studies. She is also contemplating staying involved in student journalism.