Rebels snubbed from first round of NFL Draft 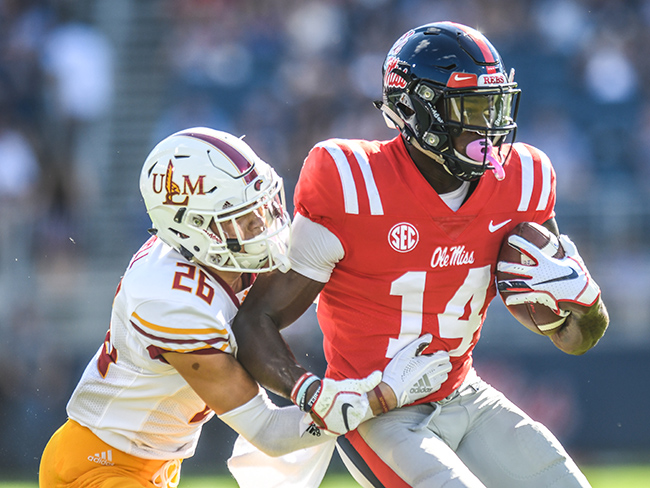 By the time you’re reading this, you probably already know that none of A.J. Brown, D.K. Metcalf, and Greg Little were first round picks in the NFL draft.

Right now, it seems like my short trip to Nashville was completely and utterly useless.

From the time the NFL combine happened back in March, D.K. Metcalf seemed all but a lock to go in the first round of the NFL draft. It seemed like teams fell in love with his off the charts testing numbers, something we literally had never seen before from a player with his size. Mock drafts had him going as high as the fourth overall pick at the time. Now he’s a likely second rounder.

The best player on the Rebel team, who many also saw as a first round pick, A.J. Brown, also didn’t see his name called Thursday night. Nor did left tackle Greg Little, although Little seemed like more of a longshot at the time.

Ultimately it hurts the most from Metcalf. The Oxford High and Ole Miss product attended the draft. He was here, waiting waiting waiting. Nothing. Usually players only come to the draft location if they know there’s a very high likelihood, or a team just straight told them, that they will be taken in the first round. Did he get bad advice? Really will never know.

Players taken in the first round get a fifth year option on their deal, second and third round picks usually get four year contract. The Carolina Panthers took wide receiver D.J. Moore in the later part of the first round last year. The Denver Broncos took wide receiver Cortland Sutton in the early second round. The two were separated by just about ten picks, but the difference in their contract is significant. Over the first four years of Sutton’s contract, he gets just about $6.8 million. Over the first four years of D.J. Moore’s? 11.1 million.

It’s just disappointing. I would’ve loved to see AJ Brown playing with Aaron Rodgers or Tom Brady, both teams with selections at the very end of the first round. Metcalf would’ve been a great fit with Baltimore, a team that very much could’ve used his ability to stretch the field.

Neither career’s will be defined by what happened on Thursday night or what happens on Friday night. Getting into the NFL, ultimately a fit with the team and how you will be used by the coaching staff matter significantly more than where you were drafted. However, teams often find it hard to move on from first round selections, the investment is just too high. So yes getting picked in the first round is important, but it’s not the end of the world for a handful of Ole Miss guys that we thought would be there but ultimately didn’t end up there. It’s just disappointing.

Greer Holston re-integrating himself with the Ole Miss bullpen