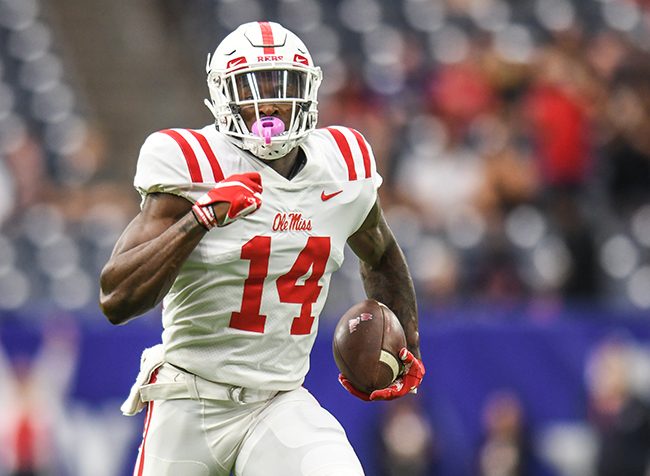 With the No. 62 pick in the 2019 NFL Draft, the Seahawks selected the Ole Miss product to booster their receiving corps and help out recently resigned QB Russell Wilson. Ending the interesting slide was Seattle. He was the No. 9 receiver taken.

Struggling with injuries during his time at Ole Miss, Metcalf hardly has the on-field numbers and production of a guy taken in the first round of the draft. Metcalf’s criticism’s come in two parts. First, can he stay healthy? He played just 20 games at Ole Miss, missing nearly the entire 2016 season with a foot injury and the back-half of the 2018 season with a neck injury, one teams were never worried about lingering around in the process.

Secondly, teams were wondering what his true ceiling as a route runner were. The Ole Miss system under offensive coordinator didn’t ask Metcalf, or any of the receivers, to run a very complicated route tree. Ultimately, the NFL was drafting on potential with D.K. Metcalf. But that’s okay.

“I think he’s been a popular target for people to kind of go after and say, Hey, well, he can’t do that or this, that and the other and the production wasn’t there. The guy got hurt. He missed time,” said NFL Network’s Daniel Jeremiah. “He’s obviously the height, weight, speed, everybody saw that at the combine. But he’s made plays. When he’s been healthy and on the field he’s made plays. He’s a pure vertical threat. He’s going to be an X wide receiver who’s going to be a big target.”

What he did have is the type of body and athleticism given only from the gods. In fact, at times he looks like one. There are very few people on the planet that can run the way D.K. Metcalf can – 4.33 40-yard dash – at his size – 6-foot-3 and 228-pounds.

Metcalf’s high school numbers are simply insane. He caught 172 balls over his final two years as an Oxford Charger for over 2600 yards and 41 touchdowns. At Ole Miss, the numbers weren’t quite as impressive, but he showed enough for scouts.

It wasn’t pretty. But D.K. Metcalf is now in the NFL. For Metcalf, his goal of being that “hometown hero” has officially come to fruition. The Oxford High School star who went down the street to Ole Miss is now in the National Football League.