Rebel baseball sweeps No. 6 Texas A&M, moves into a tie for second in SEC West 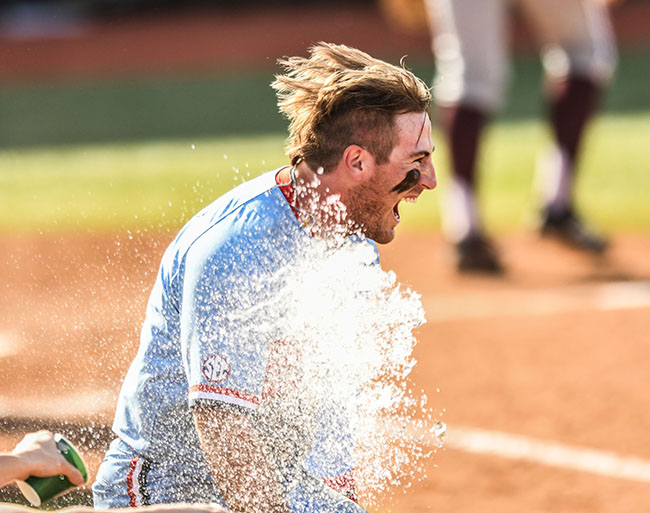 Two of the games were close. One of them was very much not.

Ole Miss has been up-and-down this season on the diamond. The consistency may not always be there for the Rebels, but when they’re on, like they were this weekend against the Aggies, they’re as hard to beat as anyone in the nation.

The Rebels swept No. 6 Texas A&M on the weekend to get to 13-8 in conference. After back-to-back series losses to Kentucky and Auburn, it was a much-needed weekend sweep for Ole Miss at the best of times. They won game-one 5-4 on an 11th inning walk-off, before dominating game two 13-3. Saturday’s game three was a pitcher’s duel that Ole Miss was also able to walk-off for the 3-2 win and the series sweep.

With the series sweep over a top-10 team, the Rebels jumped from No. 19 to No. 13 in the D1Baseball poll. Here’s some takeaways form the series.

Reliable arms as dominant as ever

There are a few pitchers Ole Miss needs to be good in order to have any chance at postseason success. The first four that come to mind were all sensational on the weekend.

Will Ethridge’s ability to extend games on Friday nights, thus keeping the bullpen fresh, makes him so valuable. He went eight full innings Friday night, striking out seven and allowing three runs. Ethridge turned the ball over to Parker Caracci in the 9th, who threw three hitless innings but allowed one run, in the 11-inning win. Caracci would also get the win on Sunday, throwing one perfect inning.

Saturday’s starter Doug Nikhazy was equally as good as Ethridge. The freshman went seven innings, allowing just one run on four hits and striking out ten. It certainly helps that the Rebels scored him six runs in the sixth, but Nikhazy’s ERA is now down to 3.19.

Lastly, it’s Austin Miller. Miller has been electric in his setup role out of the pen – Sunday was no different. Miller went two innings, allowing just one hit and no runs, on Sunday before handing the ball to Caracci to finish things off.

Ole Miss has gone long stretches on the year where they struggled to move baserunners and to hit with runners in scoring position. Thus they haven’t been great in close games. This weekend was different. Ole Miss won two, one-run games on the weekend on walk-offs in the final inning.

Trailing 4-3 going into the bottom of the 11th inning on Friday, the Rebels needed at least one run. They got two. Thomas Dillard capped a two for four day on Friday night with a 2-RBI, walk-off single for the win.

On Sunday, tied at two in the final frame, it was Dillard again. After walking to get on base and a Cole Zabowski hit to advance him, Dillard scored on a wild pitch to walk-off the game.

It’s not the first time this year Ole Miss has swept a really good baseball team. The Rebels dominated Florida in the first weekend of April before going 2-5 in their next five games against SEC teams. Now in a tie for second in the SEC West and up to No. 13 in the D1Baseball poll, Ole Miss is fighting for their chances to host an NCAA Tournament Regional here in Oxford.

While the Rebels can’t afford another 2-5 stretch against conference teams if they want to host a regional, the road isn’t going to get any easier. The next two weekend series for Ole Miss is this weekend at No. 12 LSU, before returning home for their final home stand against No. 6 Mississippi State the week after.