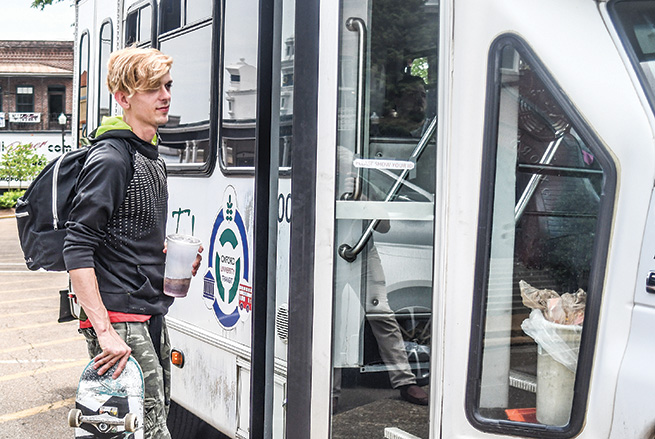 Donna Zampella has been involved in Oxford’s transportation system for many years, but now she is able to make the changes she feels are necessary. Beginning this summer, the Oxford University Transit (OUT) service is shifting to longer service hours that could become a permanent change and will see the return of a service line that has lain dormant for a couple years.

Zampella, who was officially hired as the new OUT manager earlier this year, is making in an effort to bring the Oxford portion of OUT back into the fold. In Zampella’s eyes, she believes the city has taken a back seat to a university-oriented transit system, which is partly due to the lack of awareness of the system by Oxford citizens.

Last weekend at the Double Decker Arts Festival, OUT set up a bus on the Square for people to tour and gather information about the service. It is the first step in Zampella getting the word out to the Oxford community.

“We came in 2008 and it was a joint effort between the city and university, and I think at some point or another it became more shifted towards the university,” Zampella said. “It’s not a bad thing, but I think everything was just more geared toward them. The city, in my opinion, got put over to the side. My thing is I think we need to kind of get it back in to being full swing all the way around. Us being at Double Decker on Saturday, it actually made sense in exactly what I was seeing. The more people we talked to the more people were saying, ‘oh, I thought this was just for university students.’”

Another aspect of Zampella’s community outreach strategy is the implementation of longer hours for several OUT lines. Currently, buses make their last stops around the time Oxford’s nightlife begins. With several options of entertainment being placed throughout more areas than the Downtown Square, Zampella wants Oxford residents to have the opportunity to use the transit service and not have to be home before the sun goes down.

On May 13, the lines will start at 8 a.m. and run until 10 p.m. Stops will include the Square, Malco Oxford Commons, The Old Armory Pavilion, hotels located in the Oxford Commons and other points of interest. The extended hours could continue into the fall and remain permanent if the need is there.

The Red, Blue and Gray lines will have extended hours. The Gray Line was initially paid for by the Oxford School District, but the district opted out of it around a year and a half ago. The line was not completely dissolved, but they shelved it until it was the right time to make it operational once again.

“If you wanted to see a movie then you better hit the 4 o’clock (showing) because if you wanted to ride the bus you were not going to get one after seven,” Zampella said. “To get it geared more toward the community we need to be out there available to the community …I really feel like this is a good time to try and bring back (the Grey Line). We’re going to try it this summer, and I really feel like this will be a good route once we get everyone knowing it’s available.”

Frequent riders will start to see new buses hitting their stops, beginning this year. Over the course of the next four years, the OUT fleet will add five busses per year, totaling 20 brand new buses by 2023. The first year will not see older buses rotated out- that process will begin next year. Each bus will have free Wi-Fi for passengers.

The Double Decker setup was the first of a few events Zampella wants to have to help spread the word of the OUT system to residents. There will be a community transit day held on June 20 that is tentatively set to occur at the Armory Pavilion, but no other details have been finalized. Zampella also wants to begin a partnership with the Oxford Community Market in an effort to bring awareness to both entities.

Current route schedules and bus fares can be viewed at the OUT’s page on the city’s website at oxfordms.net.

City to not fund next phase of West Oxford…