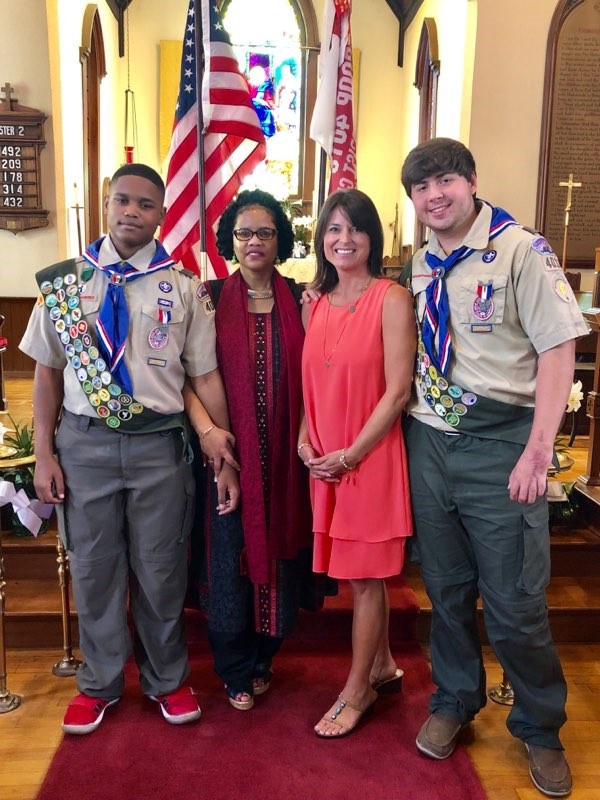 Eagle Scout RJ Willis, from left, with his mother Bobbie Willis, and Merideth Terney Selby, with her son Woods Nerren, who is also an Eagle Scout, attend an Eagle Scout ceremony in Grenada on Sunday, April 28, 2019.

Edward Larwood Nerren, IV, “Woods,” 16 and Ronnie Layne Willis, Jr., “RJ,” 15 of Grenada have earned the rank of Eagle Scout, the highest advancement rank within the Boy Scouts of America.

The teens were recognized in a ceremony on April 28 at the All Saints’ Episcopal Church in Grenada. Members of Chickasaw Council, Troop 4018, Woods and RJ are two of approximately only 2 percent of all Boy Scouts who attain the Eagle rank, according to Grenada Mayor Billy Collins, who served as Master of Ceremonies at the Eagle Court of Honor on Sunday.

“We are so fortunate to have two Grenadians join this prestigious rank,” Collins stated.

To earn the title of Eagle Scout, each candidate must earn 21 merit badges and show leadership by planning, developing and successfully completing a significant service project benefitting his community, faith organization or school. Nerren chose to repaint the two flights of stairs in his local Boys & Girls Club building, adding non-skid material in the paint as a safety precaution.

“Ten years have gone by since I started Scouts and I have made great friends along the way.  It felt good to finally finish what I started so long ago,” Nerren said. “My friends and family stood in my corner the whole time. Even though I had a few doubts at times, I am proud of my decision to achieve Eagle and will be for the rest of my life.”

Willis had a paved driveway and sidewalk built at his church.

“Boy Scouts is the highlight of my life. I matured early because of being in Boy Scouts,” Willis said. “I’ve met young men that I can now call my brothers. I had some challenging moments, but I don’t have any regrets. The achievement of Eagle will always be my pride and joy.”

Both Willis and Nerren have earned membership in the Order of the Arrow, a leadership development program within the Boy Scouts of America.

According to Nerren’s mother, the pair have received letters of congratulations from notable public figures, including Sen. Roger Wicker and country singer Charlie Worsham.