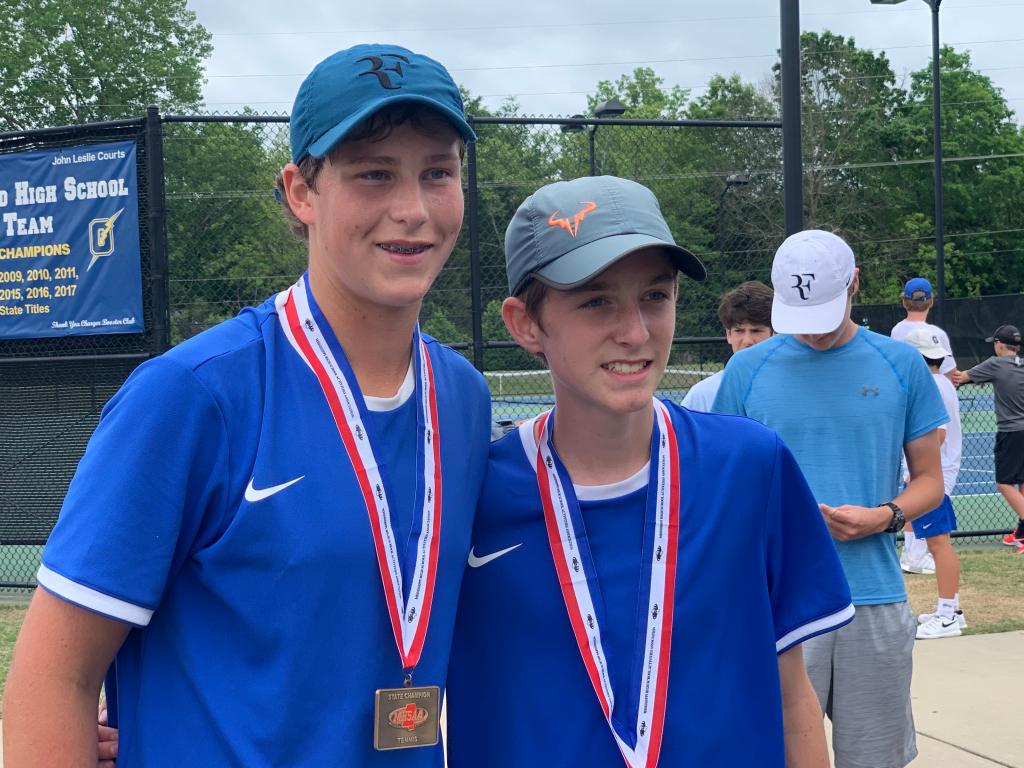 Brown Turner (left) and Mack Schuesselin (right), posing with their medals after winning the 6A state title (photo by Nathanael Gabler / Oxford Eagle)

OXFORD – The state finals match didn’t start in a favorable manner for the Charger duo of Mack Schuesselin and Brown Turner.

Fighting their way through a three-day tournament to the final boys doubles match, Schuesselin and Turner fell down 4-1 to their Madison Central counterparts. Then head coach Louis Nash stepped in.

“I told them, there’s good news and bad news. The good news is you cannot play any worse. The bad news is, you’re down 4-1,” Nash said. “Is said, just start putting balls in play. Get beat playing but don’t beat yourselves. It was a strange match.”

It was a really fast rally for the pair. Schuesselin and Turner fought back to win the next five games in a row, taking the opening set 6-4.

“Coach just told us what to do there when we were down,” Schuesselin said. “He told us to be more aggressive and not be so passive.”

That forward momentum proved essentially unstoppable for the two. After fighting all the way back to steal the opening set, they won the second one easily. With the 6-4, 6-3 win, Oxford claimed a state championship.

Schuesselin and Turner are both tenth graders, two of a number of young players on the Oxford team. Oxford’s Rowan deVera, an eighth grader, made it all the way to the state singles semifinals before being bounced, as did tenth grader Allie Grafton on the girls side.

On the Lafayette side of things, junior Ally Bowen lost 6-3, 6-2 in the finals to Olive Branch’ Mikaila Coleman. Additionally, the boys doubles pairing of Dawson Welch and Barrett Childress lost in the semifinals. For Bowen, it’s now back-to-back years where he’s walked home with silver in the 5A state finals, something she’ll be hard-pressed to get one more shot of during her senior season.

All in all, Oxford’s FNC Tennis Center hosted its biggest event ever over the course of the three-day event spanning Monday to Wednesday. Lafayette coach Debbie Swindoll referred to it as remarkable; Nash said fantastic. Ultimately, 570 competitors from across the state were at the tennis complex for the event. Schuesselin and Turner were two of the biggest, hometown winners.