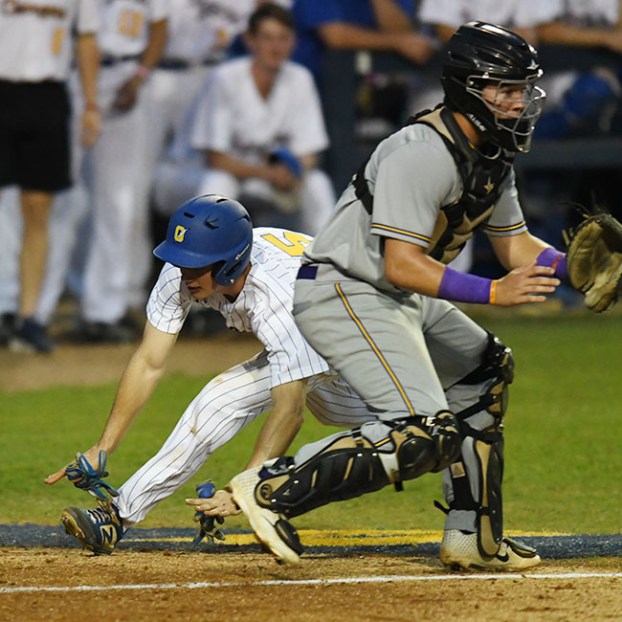 By Ben Mikell / Special to the Eagle
Oxford competed to the very end, Desoto Central’s individual talent proved too much to overcome.
Desoto Central overcame a 4-0 deficit after four innings to defeat Oxford 8-4 in the third round of the MHSAA 6A Playoffs with a 2-0 series sweep. Oxford’s season officially ends at 20-12.
Oxford struck first with a double steal attempt. Cole Catalano was caught at second, but the diversion scored Sam Bianco from third base take a 1-0 lead in the first inning. Locke Elliott almost hit a three-run homer to put real pressure on Desoto Central, but was robbed at the fence to end the inning.
The Chargers tacked on three runs in the third inning with back-to-back-to-back RBI at-bats from Eli Wicker, Clay Ivy and Elliott, respectively, to give Oxford a 4-0 cushion.
Desoto Central (29-2) put together three singles in the fifth inning to score their first run before Blaze Jordan capped the inning it with a three-run homer to right-center field. The homer tied the game at 4-4.
After a double from Alex Frillman to lead off the Desoto Central sixth inning, a throwing error scored him from second on a sacrifice bunt attempt to give the Jaguars a 5-4 lead that Oxford could not overcome. A wild pitch two batters later scored another run for a 6-4 advantage. The Jaguars tacked on two insurance runs in the seventh to provide the final margin.
Oxford coach Chris Baughman, completing his ninth season as the head coach for the Chargers, was thankful for all the seniors on the squad.
“This group of seniors, they went through, as a group, so much adversity,” Baughman said, regarding injury issues that plagued the team all season. “Injuries, people missing, and each one of them stepped up in terms of baseball someway somehow all year… They fought through so much from adversity.”
It’s an all but familiar end to the Oxford season. In 2018, the team beat Madison Central in three games before getting swept by Desoto Central to end their season. The 2019 season saw the same result.

OXFORD – One year after missing the playoffs and going 11-12, the Lafayette Commodores are off to the 5A North... read more