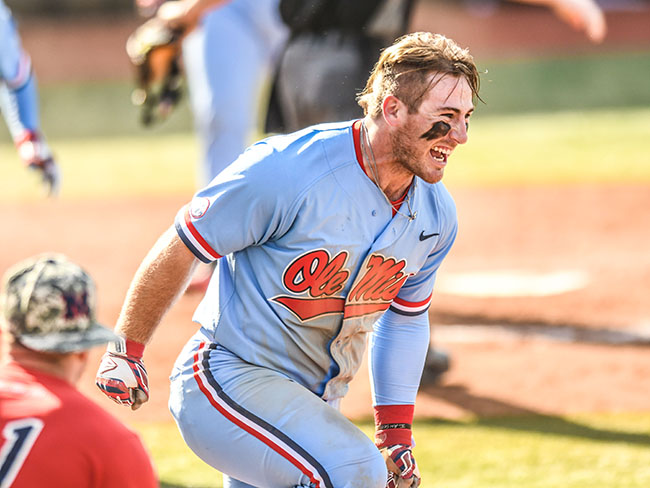 Ole Miss’ baseball team has been really good at times this year – think the sweep of Florida and last weekend’s sweep of No. 6 Texas A&M – but they’ve also been mind-bogglingly unpredictable.

Coming out of the series with the Aggies, one would think the Rebel team was playing as well as they had all year. Then they lost 5-3 to Southern Miss on Wednesday.

It’s been a year of ups and downs for the Rebels. They swept Florida, then lost four of the next six SEC games. They swept Texas A&M, then lost at Southern Miss. And things aren’t getting any easier. Ole Miss’ trip south continues on the weekend, starting a three-game stint with No. 12 LSU on Friday.

Here’s four things to keep an eye on as the Rebels attempt to return to form:

Hitting left-handing pitching has been a significant problem, not just for Ole Miss, but for everyone in the SEC. However, there are signs that they may be turning the corner.

Coming into last weekend, Ole Miss was hitting just .252 against left-handed pitching and averaging just 4.31 runs per nine innings. Both of the numbers are significantly lower than their right-handed counterparts. Against Texas A&M, the Rebels saw six lefties and the results were much better than expected.

It’s a big part of the reason Ole Miss was able to sweep the Aggies. The Rebels hit .280 against lefties from Texas A&M, scoring 7.46 runs per nine innings, an incredible improvement. Time will tell if this is just a one weekend sample or a sign they are turning the corner.

Going into LSU, Ole Miss is currently in a three-way tie for second place in the SEC West at 13-8. The conference record is pretty solid, but the mid-week games have been rough.

Losing to Southern Miss isn’t good, but it’s nothing like the loss to North Alabama back in the beginning of April. Luckily for the Rebels, they have just one such game left – May 14 against Arkansas State on the road. At this point of the year, playing SEC games is hard enough. You really need to win the games you are supposed to win.

Third Base: Ryan Olenek’s affinity for running into hard objects

It seems awfully silly, but Rebel center fielder Ryan Olenek ran into yet another wall on Wednesday. Making a great catch in center field against Southern Miss, Olenek collided with the outfield wall and came up a little gimpy. It’s far from the first time all year this has happened.

Olenek missed four games recently after a collision with the outfield wall against Kentucky, and subsequent falling to the ground, reaggravated an injury to his hip. Olenek stayed in Wednesday’s game and appears to be okay this time, but Ole Miss can’t afford for the senior who’s hitting .364 to miss much more time.

Thomas Dillard was involved in two walk-offs last weekend. The Oxford native wasn’t playing his best baseball to start SEC play – he had just three RBIs in his ten SEC games before the Texas A&M series. The Aggie series was different. He hit 4-for-10 against Texas A&M and drove in five runs.

Like the rest of the Ole Miss team, his consistency isn’t the best. He turned around the great weekend and went zero for three against Southern Miss on Wednesday. Dillard’s powerful bat in the middle of the Ole Miss lineup is critical for the team to be able to drive in runs.

The three-game series at LSU begins Friday at 7 p.m. and runs through Sunday. Friday and Saturday’s games will be available on SEC Network+, with the Sunday game televised on ESPN2.

Despite being no-hit, Oxford shows signs of optimism against…