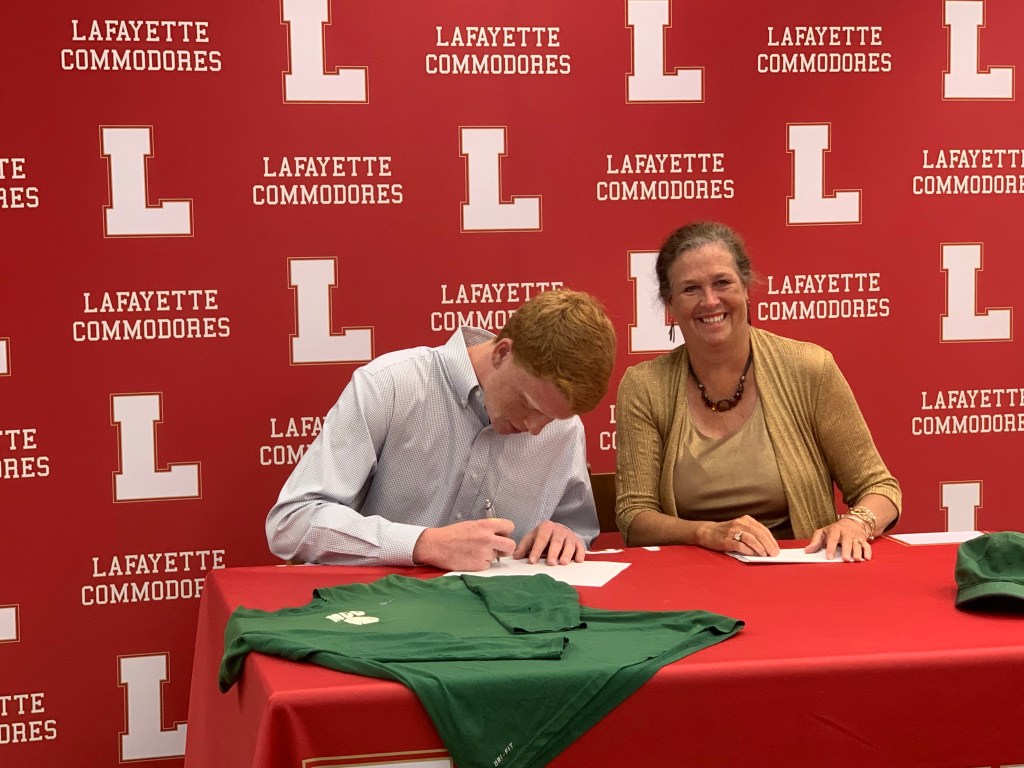 Dawson Welch (left) in a signing ceremony on Friday with his head coach Debbie Swindoll (right).

Just days after the conclusion of his senior season, Lafayette’s Dawson Welch is following in the footsteps of many before him.

Welch says he decided a while ago that he wasn’t going to play college tennis. However, going to a few Ole Miss matches in the fall made him fall in love with the atmosphere of college tennis and reconsider his decision.

“I felt excitement and the energy of them playing. It made it feel like the right thing,” Welch said. “I really like the teammates and the coach down at Meridian and it seemed like a good fit.”

There’s a bit of a turnover at the coaching realms over at Meridian, as longtime head coach Wanda McPhail retired about a year ago, taken over by former MCC standout Simon Bardell. However, the history of MCC tennis speaks for itself. The Meridian men have qualified for the national tennis tournament 17 of the last 19 years, finishing in the national top-10 every year since 2004.

“Dawson is the caliber of player that we want at Meridian,” said former MCC head coach Wanda McPhail. “He comes from one of the top programs in the state… we love getting players from Lafayette and Oxford as they know how to win.”

Meridian and the Oxford area schools have a bit of a history. With the signing today, Welch becomes the tenth Lafayette or Oxford tennis product to sign with the school.

During his time at Lafayette, Welch was an integral part of the school’s first 5A state tennis team championship in 2018. This year, he was a 5A semifinalist in individuals and part of the team that finished as the 5A state runner ups.

Outside mood shifting on Ole Miss softball, but ‘disrespect…