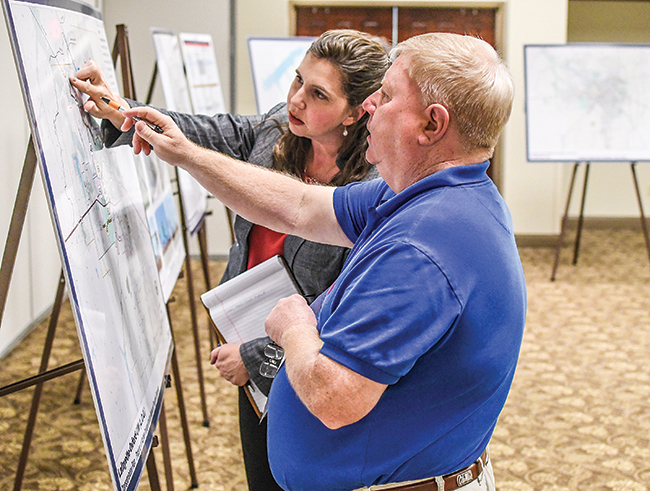 City engineer Reanna Mayoral, left, looks over a map with Jeff Roberson at a public hearing on a Transportation Master Plan at the Oxford Conference Center in Oxford, Miss. on Thursday, May 2, 2019.(Bruce Newman, Oxford Eagle)

The City of Oxford held a public meeting on Thursday where they presented a draft of the LOU Transportation Plan, giving residents of Oxford and Lafayette County the opportunity to see how the infrastructure will begin to change over the next 25 years.

In a similar manner to the first public meeting in March of 2018, people were able to see maps, charts and renderings of what some of the proposed changes to Oxford and Lafayette County’s roadways will look like. They were also given the opportunity to voice their opinion by writing notes or comments on a Post-It note by the project they had concerns over.

“The city, county and university hired us to study the transportation system here to see what it might look like in 20 to 30 years based on traffic projections and then try and figure how the system might need to be improved to handle traffic in the future,” Eric Jefferson of Waggoner Engineering said. “We considered more than just vehicles. We consider transportation to be multi-modal. It’s vehicles, it’s pedestrians, it’s bicyclists and it’s transit. We looked at all segments to see how it could optimized for all future conditions.”

The joint effort by the University of Mississippi, Oxford and Lafayette County began in November of 2017 when the city’s Board of Aldermen approved an Interlocal Agreement between the three parties. The city also entered into a contract with Waggoner Engineering out of Vicksburg who conducted a transportation study.

The contract with Waggoner involved two parts. The first was the Transportation Plan, which involved an assessment plan development and a network model. The second part is program development where projects were prioritized and implantation strategies set.

The assessment and prioritization of roadway program elements for the LOU Transportation Plan includes both quantitative and qualitative metrics. The metrics used were defined using feedback from the Technical Advisory Committee. The plan also recognizes the limited funding available to address all of the needs in the city and county. The candidate roadway program elements were prioritized to identify the most needed transportation improvements.

In a 2017 study, each roadway received its own ‘Level of Service’ (LOS) score. The highest ranking in that category went to roadways with the poorest LOS.

Key projects in the first group that could begin in the next five years include widening Old Taylor Road and the intersection of Chucky Mullins Drive and Highway 6. The biggest priority in the first group is the Jackson Avenue West project. The proposed project would raise the median in the middle of the four lanes and adding jump lanes at intersections while also putting bike lanes for cyclists.

There are three different options proposed with the Jackson Avenue project. The first has the bike lanes going down the center between traffic and the other two options have designated bike lanes on the shoulder.

Long-term projects include work on several county roads as well as the Sisk Avenue Extension from North Lamar Boulevard to Avent and the Ricky Britt Extension from Highway 6 to Old Taylor Road.

The next step in the process is presenting the Board of Aldermen, Lafayette County Supervisors and the University with the recommended plan for their approval and adoption.