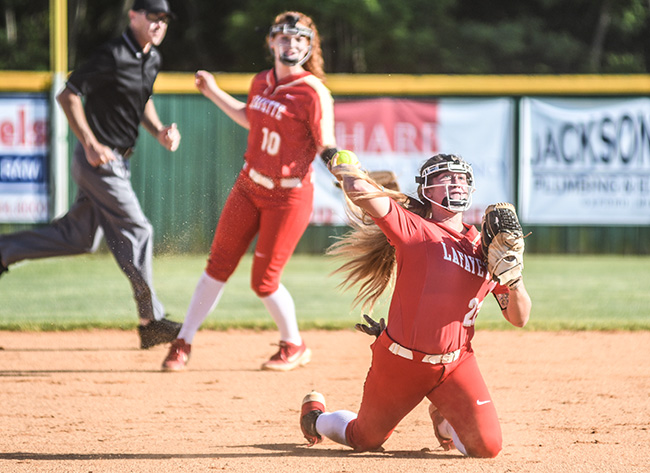 Lafayette High's Chloe Russell throws to first for the out after making a diving stop against Neshoba Central in MHSAA Class 5A playoff action in Oxford, Miss. on Monday, May 6, 2019. (Bruce Newman, Oxford Eagle via AP)

OXFORD – The fact that the Lady Commodores even played in the 5A North Half final is an accomplishment in itself.

After losing four straight in early March, being blown out two of the four, it took a sensational bounce-back to even have the opportunity they had Monday night.

After losing game one 2-0 on the road, the Lafayette softball team lost to Neshoba Central 17-0 at home on Monday night to end their season in the 5A North Half final.

“If someone told me midseason we’d even be playing for a North Half championship, I’d have told them ‘you’re crazy,’ said Commodore head coach Katie Jenkins. “They really came together after that midseason bump.”

Monday night, Lafayette simply ran into a buzzsaw. The same Neshoba Central team they lost to is the team that’s won every 5A Mississippi softball title dating back to 2013. They currently rank No. 16 in the nation according to MaxPreps.

“It’s not a one-game thing to see. It’s just very good pitching. She’s good,” Jenkins said. “It’s something that you don’t see a lot around here.”

The Lafayette ace, sophomore Madyison Cobbs, was fantastic in game one, but struggled on Monday. Cobbs allowed five runs in the third to push the Rocket lead to seven before being pulled from the game. Things didn’t get any easier for the Commodores, as they allowed nine more in the sixth alone to end the game.

As a whole, it’s certainly a positive season for the Commodores. As their coach said, they weren’t even supposed to be there after what happened mid-season. Jenkins credited the girls with being able, mentally, to change their season by digging down, telling each other that they’re better than how they’ve been playing.

They would follow that slump up by winning five of seven en route to their first 5A-Region 2 title and the first-round bye. A relatively young team, they’ll still have a lot to replace from their three seniors in Mariah Holland, Madisen Rainey and Chloe Russell. Holland alone hit .397 this year, driving in 35 runs on the year and scoring 23 times herself.

For the majority of the girls that will return for the 2020 Lady Commodores, the rough series sweep to Neshoba Central is a sore spot tonight, but one they will certainly grow on and learn from moving forward.

“This game is a game of failure. When you do have failure, you have to be able to push through it and overcome it,” Jenkins said. “The younger girls I have out here will take from that and learn from it.”