Mayor Tannehill: I apologize for ‘lack of communication’ about meter stickers 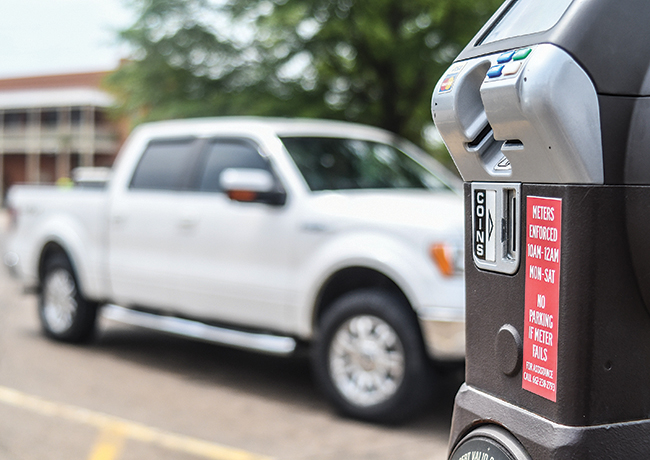 Those parking in a spot with a non-working meter will be ticketed, in Oxford, Miss. on Tuesday, April 30, 2019. (Bruce Newman, Oxford Eagle)

After stating people would be ticketed for parking in spots with a broken meter, or if the meter went out after someone paid, the decisions was quickly reversed on Saturday. Following a story reported on by the EAGLE, the Oxford Police Department released a Facebook post claiming they will not issue citations for broken meters

The original story stated the city’s parking division placed red stickers on parking meters around the Square a month ago warning people to not park in spots where a meter was broken or malfunctioning. If someone chose to park in those spots they were going to be issued a citation, according to Oxford’s Director of Parking, Matt Davis. Davis also said if someone paid for their spot and the meter goes out after the fact, they would still be issued a citation but could go through a process to have it dismissed

“If enforcement walks to a meter and it’s blank and there’s somebody still there we just have to all initially write a citation,” Davis told the EAGLE in an interview last Friday. “When we did get the stickers put on a couple weeks ago we had a lot of people there were like, ‘Oh, we didn’t know that before.’ It’s actually in an ordinance that says if you park in a meter you have to initially go an pay it and if it doesn’t allow you to pay it you have to go and find a different spot.

In Ordinance Section 102.549 it does not mention a citation will be issued to a person parking in a space where a meter is malfunctioning

Davis stated the stickers were initially put on the meters to provide more information regarding who to call if a meter was broken, claiming the OPD dispatch had been receiving too many non-emergency calls about parking meters

“We would like everyone to know that this was not a decision voted on by the Mayor & Board of Alderman,” the statement read. “This was a decision made within the department with the intent to report broken meters. You will not receive a citation for parking in a meter that is not functioning properly.

Mayor Robyn Tannehill also took to social media on Saturday morning, echoing the OPD’s statement and assuring the Oxford residents the will work to better inform them about the meters in the future

“In my opinion, if you find a spot with a broken meter, we should issue you a an ‘It’s your lucky day!’ sticker,” Tannehill tweeted. “We will be replacing the stickers and providing clear directions on reporting meter maintenance issues. I apologize for the confusion and lack of communication within our City departments on this issue.”