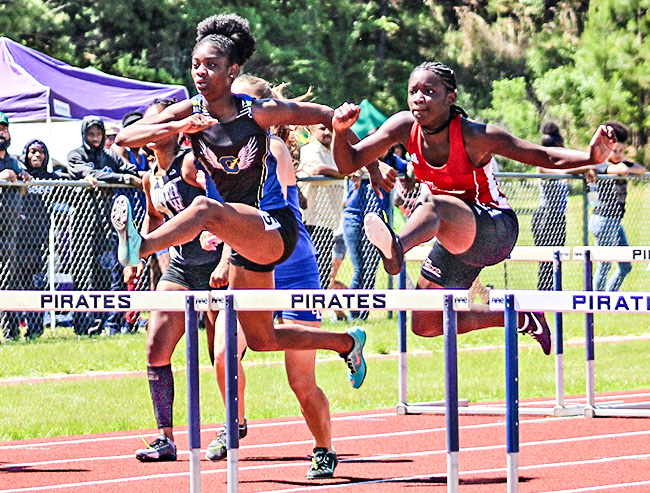 Oxford High’s Ashley Epps (5) clears a hurdle during the Class 6A girls 100 meter hurdles at the MHSAA state track and field meet on Monday. Jerricka Ambus of Brandon won the race and Epps finished seventh after she fell in a multi-runner collision. (Ernest Bowker/The Vicksburg Post)

The Lafayette girls finished No. 9 in the state with 40 points while the boys finished in a tie for No. 11 with 24 points. Long Beach won the girls title and Hattiesburg took the boys.

Individually, the Commodores produced three silver medalists and two bronze medalists on the day. The distance events proved to be rather fruitful for Lafayette.

Bralen Williams took second place in the boys 800-meter run with a new personal record of 2:03.28. Only a freshman, Williams has a bright future on the track for the Commodores – he also took fourth in the pole vault. Mia Dawson finished second place in the girls 3200-meter run, also sporting a new personal record with 12:15.05. She also finished fourth in the 1600-meter.

Lafayette’s final silver medal came from senior Mariah Holland. Earning silver this year with her 35-foot throw, it’s the third year in a row for Holland to medal in the event.

Thankfully, Ashley Epps would get her payback later in the day. Epps won the 300-meter hurdles with a time of 43.66, the only gold medal on the day.

As a team, the Oxford girls finished tenth with 28 points. The boys finished seventh with 39 points. Clinton won the state championship for the girls with 98.5 points and Pearl won the boys with 98 points.