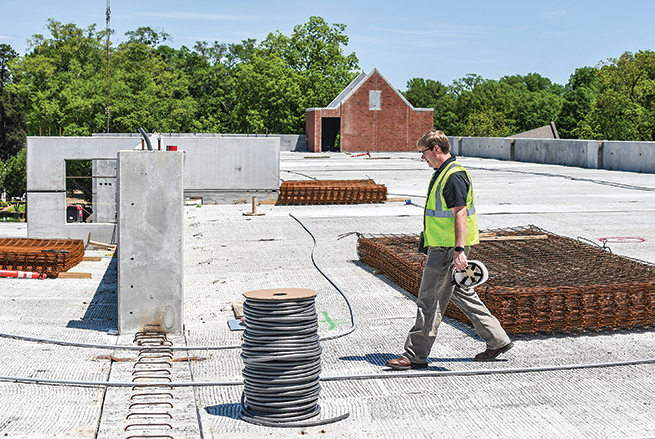 With a little over four months until the project’s completion date, city officials got a close-up of the downtown parking garage’s progress on Monday. A topping ceremony was held to commemorate the end of the pre-casting and erection phase.

Several members of the Downtown Parking Commission and Board of Aldermen were present for the ceremony, including Mayor Robyn Tannehill. Before the banner was raised, which city officials signed, a tour of the garage was given. Being able to put a visual to all the discussions that have been going on over the past couple years helped realize the garage is nearly ready.

“I couldn’t be more proud of it, honestly,” Tannehill said. “You look at it on paper and you know that it mimics the design of city hall and you’re trying to replicate the brick. Just seeing it, it feels good. I’m excited we’re as on schedule as we are. I know that parking is difficult for everyone every single day, but help is on the way.”

Last Friday, a representative from Innovative Construction Management provided an update on the garage’s progress during the Parking Commission’s regular meeting. Before the weekend, the project was around 93 to 94 percent complete with erection. The next phase is to pour concrete slabs for each of the four floors in the garage. A three-inch concrete slab will be poured on each level, beginning on May 17. This is tentatively scheduled to complete by June 10.

Construction of the physical building is moving along as scheduled. The planning and implementation of a revenue model for spaces in the garage, around the Downtown Square and in surrounding areas are the last piece to the puzzle. The commission has supplied a recommended model to the Board of Aldermen for their consideration.

“People want convenient parking and free parking and often those two things just can’t be the same,” Tannehill said. “This Board is committed to utilizing revenues generated by parking to pay for this $12 million garage and we’re trying to get it right. We’re going to be willing to make changes over the year as we see what people’s habits are and where they park. Everything’s projected at this point, but we’re willing to make changes to accommodate parking and paying for that bond note.”

The garage is on schedule for completion by Sept. 24 with a revenue model going into effect by Oct. 1.