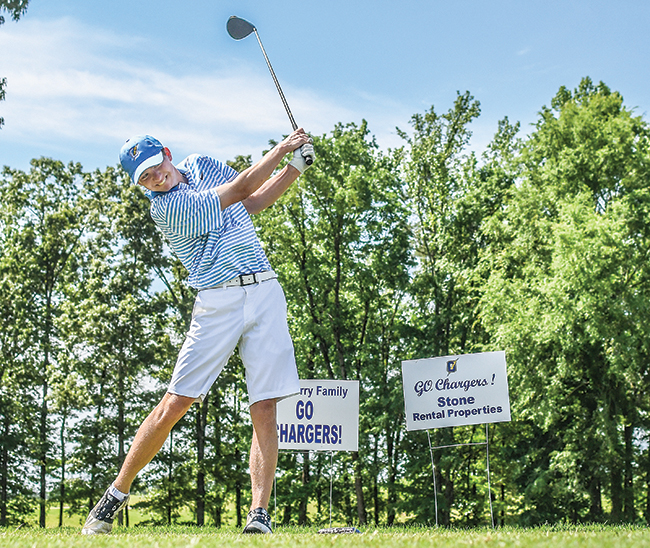 OXFORD – High school golf tournaments are interesting. It’s not like watching the Masters, where everyone in attendance and watching on television knows the standings coming down the stretch.

Tuesday at the Ole Miss Golf Course in Oxford, everyone waiting around the 18th green for the final trio of golfers from Madison Central, Oxford and Tupelo thought the outcome was coming down to the final strokes.

As it turns out, Tupelo had the tournament squarely in the bag for a few holes.

Trailing Madison Central by three strokes and Oxford by two strokes entering day-two of the 2019 6A Golf Championship, Tupelo posted a day-two 293. The 293 brought their final score to 602, winning by nine strokes.

“It feels great to go out this way. I was so proud of them today. They fought back and everyone stepped up today,” said Tupelo head coach Sherry Rial, who is retiring following this season.” We had some decent scores yesterday but some of our guys didn’t play up to their potential. Today everyone stepped up. It was really special.”

Coming down the stretch, it was freshman Walker Wise leading Tupelo with a day-two 69 (3-under). Not to be outdone, the best round of the tournament went to Oxford senior Mark McManus.

McManus, after shooting a day-one 78, came back to carry the Oxford team through the second day of the tournament with his tournament best 68 (4-under). McManus started off the opening round well, but said he fell apart after an eagle put holed out on his opening hole. Where he shot 2-over on the par fives on Monday, he shot those holes 3-under on the second day.

His day-two 68 propelled McManus to a tie for the third best individual score with Madison Central’s David Beard. Gulfport’s Sam Lee won the individual gold with a 144 over two days and Walker Wise finished second with a 145.

Last season, in their first as a 6A program, Oxford needed no adjustment to the 6A jump, winning by 14 strokes shooting a 585 (9-over par). This year was a little harder, shooting a 36-over par 612.

The Chargers fielded a unique 5-man team for the tournament consisting of two seniors that had been playing together since junior high (Frank Yerger and Mark McManus), a sophomore in Taylor Durham that was one of the best individuals in the state last year as a ninth grader and two eighth graders in Matthew Downing and Harlan Yerger.

“I was thinking about retiring in two years, but with these eighth graders I got coming up I might stick around a little longer if they let me,” said Oxford head coach Steve Herring. “We have these two with four more in the waiting. And they’re all four just like those two, they just couldn’t beat out those three older guys this year.”

Ultimately, the 307 they shot Monday and the 305 on Tuesday was two of the best rounds of consecutive golf they’ve played all year according to Herring. They played just about as well as they could have played for the tournament, just getting outplayed by the blistering final round from the Tupelo golfers.

It certainly helps that for the 2019 6A Championships, Oxford got to play on what is essential home turf for the two-day championships. Playing at the Ole Miss Golf Course, where the tournament comes every four or five seasons, Oxford did it’s best to take advantage of its home turf. It just wasn’t enough in the end.

“It actually helps a lot. A lot of those subtle breaks that you don’t really see when you’re reading the green, you know it’s going to break in a certain way,” McManus said. “You know where you can miss a shot and where you can’t.”

The loss caps a solid career for the two Oxford seniors, McManus and Frank Yerger. Both were part of two championship teams in 2017 and 2018, coming up just short in this iteration. For Tupelo coach Sherry Rial, there’s literally no better way to go out.