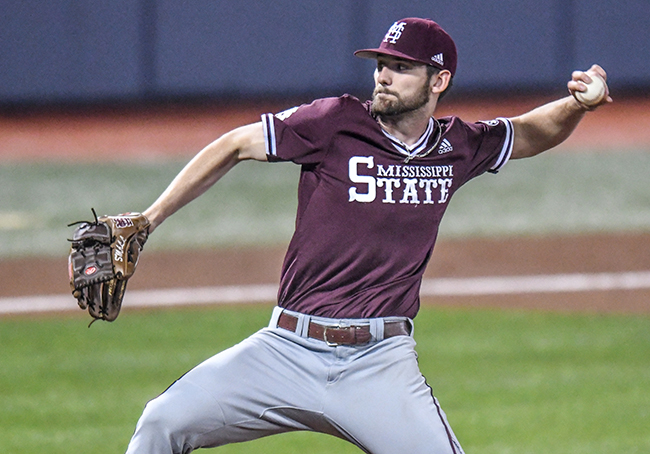 OXFORD – Two hours of rain delays and another thirty minutes of a fog delay wasn’t enough for Ole Miss to put away Ethan Small and Mississippi State Friday night.

The fog delay in the middle of the sixth inning was enough to force Small off the mound, but his work was done. In just five innings of work, Small was dynamic, leading the Bulldogs to their 2-0 win over Ole Miss to start the three-game series.

Small, the soon-to-be potential first round pick, struck out ten batters over the first five innings. Ole Miss got just three hits off of Small in sixteen at bats. Ole Miss hit at a batting average of .186 on the night, a good bit below his season average of .231.

While the night was dominant for Small, he had to leave after the delay in the sixth. Unfortunately for the Rebels, his replacement, Jared Liebelt was nearly as impressive on Friday. He finished the final four innings of the game, allowing three hits and working his way out of a jam in the eighth with a double play.

Will Ethridge was really good in his own right on the bump for the Rebels. He went six innings, giving up only two runs. However, you’d like more innings from him. It’s not really his fault though, being forced from the game when the fog delay happened. Ole Miss has played their best, of late, when they get long Friday outings out of Ethridge to set up the remaining two games. Getting through Friday using only two pitchers allows the Rebels to keep Austin Miller and Caracci fresh. They didn’t use either in the loss Friday but got three quality, scoreless innings out of Houston Roth.

“Both teams pitched it really, really well. Of course Small, and Ethridge too,” said Ole Miss head coach. “We had a couple of opportunities where we just couldn’t cash in.”

The Rebels got their best opportunity on the night in the eighth. Back-to-back singles from Cole Zabowski and Kevin Graham brought Justin Bench to the plate with two on and no outs. In an unsurprising decision, Bianco decided to bunt Bench. Down 1-2 in the count, Bench was still bunting with two strikes. Foul ball strikeout. Jacob Adams, pinch hitting for Josh Hall, ended the inning grounding into a double play, making the bunt decision all the more monumentally detrimental.

Ole Miss’ aggression on the base paths came to hurt them early in the game. It’s a strength the team has over State, having stolen 80 bases on the season to State’s 41, but it didn’t help Friday. In the first inning of play, Tyler Keenan got thrown out trying to stretch a single into a double. Just one inning later, Thomas Dillard was thrown out stealing against a left-handed hard thrower in Small.

For Roth, it’s another in a string of really good outings of late on the mound. He blanked the Bulldogs tonight and has allowed just one run in his last five appearances, seemingly cementing himself as another arm the Rebels can turn to in tough situations.

“The command has been better and he’s finally healthy,” Bianco said. “The fastball has a little more life and the breaking ball is a littler sharper. You can see the confidence in him. He was terrific.”

It’s the first time Ole Miss has been shut out this season.  Tomorrow’s game is tentatively scheduled for Saturday at 6:30 p.m.