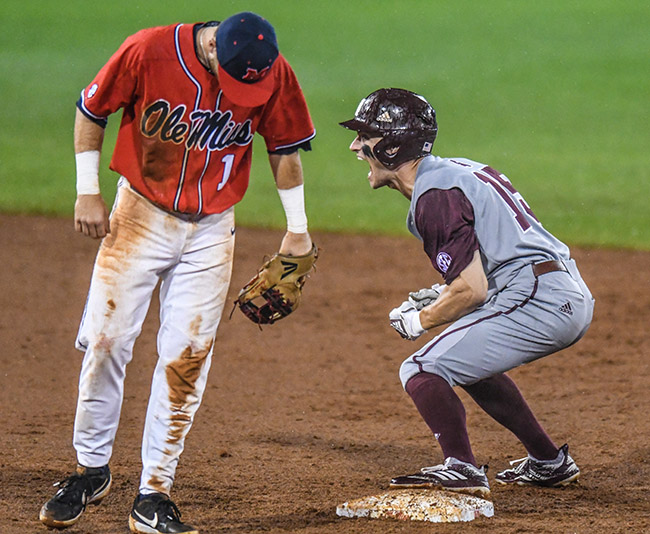 Mississippi State's Jake Mangum celebrates his RBI single as Mississippi second baseman Jacob Adams (1) walks back to his position at Oxford-University Stadium in Oxford, Miss. on Saturday, May 11, 2019. Mangum reached second base due to an error on the play. (Bruce Newman, Oxford Eagle via AP)

OXFORD – Ole Miss has simply not played well against Mississippi State the last four years. Arguably more concerning is how poorly they’ve played against the Bulldogs in Oxford.

Mississippi State needed a comeback Saturday, scoring six runs in an ugly seventh inning to win a 8-5 game. Ole Miss has officially lost this series, but it’s the bigger picture trends are concerning.

After tonight’s loss, Ole Miss has not won a game against Mississippi State at Swayze Field since they swept the Bulldogs in 2015.

The woes haven’t come just in Oxford over that stretch – they’ve come in Pearl, Starkville and any city in-between the three you can name. Since the start of the 2016 season, Ole Miss is now just 2-13 (a win percentage .133) against the Bulldogs.

The two (or more) Rebel runs that weren’t

Ole Miss got two runs in the top of the first, but it really could have (and let’s be honest, should have) been more. Back-to-back, two-out RBI singles from Cole Zabowski and Cooper Johnson drove in the two Rebel runs of the inning before the officials stepped in. Jacob Adams put a ball in the direction of the second baseman, who misplayed the ball and ended up colliding with Kevin Graham on the base paths.

Despite the fact that the ball had already gotten past Justin Foscue at second base at the time of the collision, baserunner interference was called on Graham, effectively ending the inning. If the umpires would have, rightly, let the at-bat play out, two more Ole Miss runners would have scored. To say Mike Bianco was heated on the play as he screamed at not one, but two, of the umpires would be an understatement. Baserunner interference is a non-reviewable play.

“I was just trying to avoid running into the ball and kind of take a step out of the baseline. I don’t even know what happened,” Graham said. “I just tried to avoid the ball and got hit.” 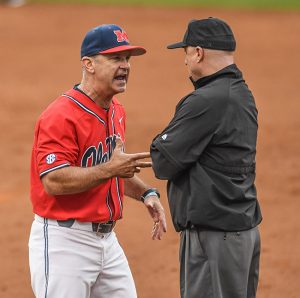 Mississippi head coach Mike Bianco, left, argues a ruling with second base umpire Tyler Simpson during a game against Mississippi State at Oxford-University Stadium in Oxford, Miss. on Saturday, May 11, 2019. (Bruce Newman, Oxford Eagle via AP)

Doug Nikhazy was fantastic early, let things get away from him a little bit in the middle innings, and came back strong in his final two. After striking out the first two batters and getting though two innings on a very low pitch count, Nikhazy was lucky to get through the third and fourth surrendering just one run.

A leadoff walk in the third and a single to the next batter put two on with no outs in the third. Hitting the third batter to load the bases and bring up Jake Mangum, things weren’t looking good for Nikhazy. What happened next was truly impressive for a true freshman in his first rivalry game. Doug Nikhazy got Mangum, a notorious Rebel killer in the past, to fly out. He walked the next batter for a run before getting Tanner Allen to ground into a double play.

“Stuff-wise, if you’re evaluating, it’s probably his worst outing in a long time. But you see why he’s so good – it’s not just about stuff,” said head coach Mike Bianco. “Doug showed you why he’s had so much success. He has really good stuff, tonight he didn’t, but tonight he just competed.”

Given those circumstances, allowing one run and thus preserving the 2-1 lead at the time, was a really impressive sequence.

Entering the weekend, this was the game Ole Miss needed to have to have a shot at winning the series. Friday, going up against Ethan Small (6-1, 1.85 ERA), was always going to be a longshot. Sunday against senior Payton Plumee (4-3, 3.54 ERA) was always going to be a tossup. Ole Miss nearly won the game they needed to win tonight. The Doug Nikhazy Saturday plan worked to perfection, right up till the moment it didn’t.

Austin Miller has been Ole Miss’ most reliable bullpen arm this season season. He’s fallen a bit of late, but still reliable coming into the series. Over 21.0 innings of SEC relief work, Miller came into the night with a 2.14 ERA and had been, successfully, thrown into a handful of really ugly scenarios. He was still the guy Bianco trusted.

Miller was brought in to start the top of the seventh inning after Nikhazy allowed just two runs through six innings. He wouldn’t record a single out and was credited with four earned runs. The first six Bulldog batters in the inning would reach base in a frame where they recorded six runs on five hits and two walks. Parker Caracci came in to get the three outs in the inning, being credited with two runs himself, but the meltdown was just about complete behind Miller’s right arm.

Ole Miss will get one more crack at an attempt to avoid back-to-back sweeps at home to the Bulldogs. Sunday’s game is slated for a noon start.