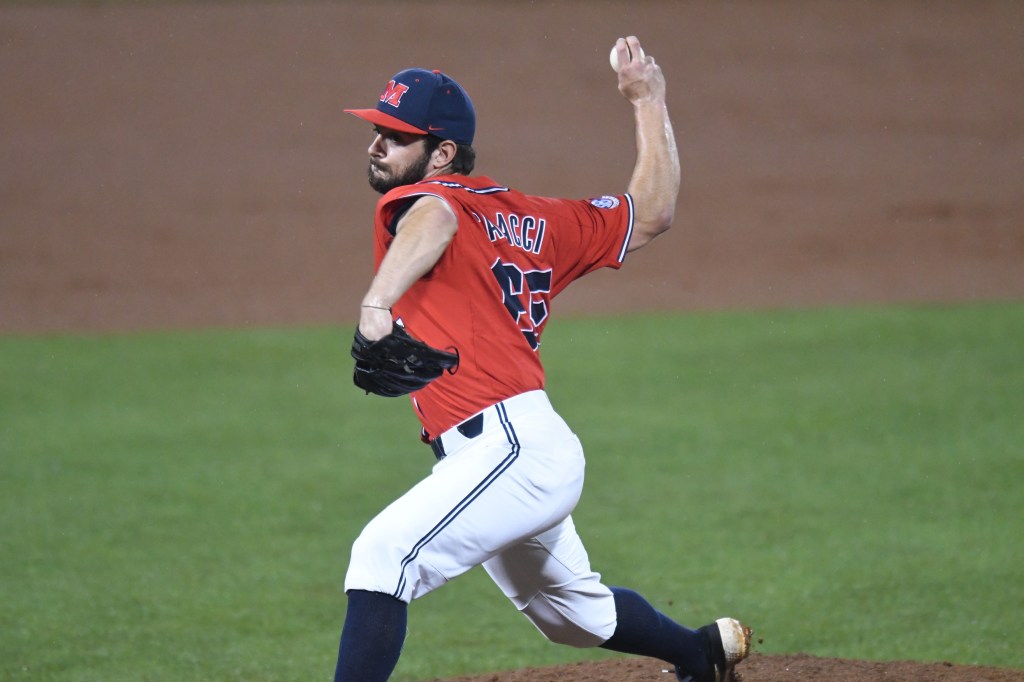 “What’s the key to making sure everyone shakes this off moving forward?”

“That’s a tough question right now,” replies Ole Miss catcher Cooper Johnson after a long pause. “I think…[another pause] it’s just part of baseball. You have to be able to move on.”

Johnson was behind the plate for every pitch, every long inning, every bullpen meltdown for Ole Miss this past weekend. Holding mid-inning leads both Saturday and Sunday, Mississippi State put together a single, big inning the minute the starting pitcher left the game.

After losing a close-fought 2-0 game Friday night to one of the best pitchers in the nation, the Rebels lose 8-5 on Saturday and 11-5 Sunday to the Bulldogs. Saturday, it was a six-run seventh inning. Sunday a nine-run fourth inning. With the three-game sweep, Ole Miss is now 2-14 against Mississippi State dating back to 2016 and 0-6 at Oxford-University Stadium.

Last Sunday, in Baton Rouge with a chance to win a series there for the first team since 1982, a ninth inning collapse nearly crippled those hopes. Parker Caracci allowed back-to-back-to-back home runs in the ninth to allow the Tigers to score six runs in the inning and tie the game at 15. Ole Miss would win in the 10th inning.

This weekend the blowups came earlier and Ole Miss was unable to recover this time around.

“It’s been our kryptonite or downside this weekend, that big inning,” Johnson said. “There’s moments in the game where the game is won or lost. It’s a couple of pitches or a couple of at-bats that are detrimental to whether you win or lose… There are moments where you have to make pitches. And if you don’t make pitches, you will lose the game. You can win the game with one swing of the bat. We just didn’t make that pitch today or this weekend.”

One pitch can certainly lose a baseball game. This weekend it was a string of bad pitches. Austin Miller, Ole Miss’ dominant setup reliever up until recently, was the culprit Saturday. About a month ago, head coach Mike Bianco had this to say about Miller: “We’ve had a lot of really good closers over the year, but I’m not sure we’ve had a better guy before the closer than him.” He hasn’t had his best two weeks by any means.

Brought in to start the seventh inning Saturday after freshman Doug Nikhazy allowed just two runs through six innings, Miller wouldn’t record a single out and was credited with four earned runs. Caracci recorded the final three outs of the inning but gave up two runs himself.

Sunday’s nightmare scenario was even more of a group effort. Carrying a 2-1 lead into the fourth inning, Ole Miss recorded the first two outs of the inning. Hoglund, Zack Phillips and Max Cioffi all combined to allow the next ten Mississippi State batters to reach base before recording the third out. The nine-run affair saw every single Bulldog batter score a run in a single inning.

The struggles and issues may be, and probably should be, a bigger deal internally, but at least outwardly the message is of unwavering confidence.

“I don’t think our morale or anything like that has wavered at all,” Miller said. “We all have each other’s back and I don’t think the guys in this dugout think anything less of that. They trust us and we trust them. Stuff happens.”

To some degree that’s fair. Stuff does happen. Baseball is a relatively fickle game, but when stuff happens again and again and again, it’s time to start accepting it for what it’s worth.

Mike Bianco brushed off concerns of bullpen struggles following Saturday’s game. Then things happened again, and worse, on Sunday. After the series finale, he at least acknowledged the similar problem Johnson addressed earlier.

Both Johnson and Bianco emphasized the importance of the upcoming mid-week game. The Rebels travel to Arkansas State on Tuesday to face a team they beat 15-3 back in February. Some positive momentum heading into a weekend series at Tennessee is much needed.