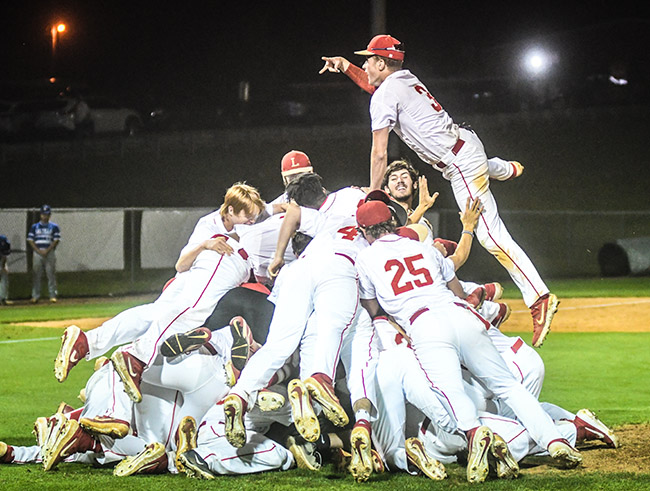 Lafayette High players celebrate a win over Saltillo in game 3 of the MHSAA Class 5A North Half Finals at W.V. Brewer Field in Oxford, Miss. on Tuesday, May 14, 2019. Lafayette High won 8-1. (Bruce Newman, Oxford Eagle)

The Lafayette Commodores are off to Pearl to make a run at captaining the ship.

Where the Lafayette baseball team got inside their own heads Monday night, Tuesday night was a completely different story. The Commodores were locked in and as efficient as they’ve been all year on Tuesday, beating Saltillo 8-1 in game three of the North-half final. They’re off to their first ever 5A state championship match.

“It takes me back to seventh grade,” said Lafayette starting pitcher and senior, Foster Westbrook. “We’ve all been thinking about this every day and it’s finally came true. It’s what we’ve been working for our whole career. Now we’re going to Pearl. At this point, we might as well go win it.”

Lafayette is off to states. They beat Saltillo 8-1 in the third game of the 5A North-half final.

Everything that Lafayette (20-10-1) was in the second game of the series was different. The team recorded just four total hits in game two. In game three their first two batters on the night got on base. It took just two batters for the Commodores to build an early 1-0 lead on Saltillo (23-12-2). Senior Ben Harper tripled to start the Commodore home half and scored just one batter later on a single by Tyrus Williams.

For the Tigers, the sloppiness on the mound proved to be a kryptonite they couldn’t overcome. After allowing eight combined hits and walks in game two on Monday, Saltillo pitchers allowed 17 on Tuesday night in game three. During one critical sequence in the fourth, already trailing the Commodores 2-0, Saltillo pitchers walked four consecutive batters leading to two Lafayette runs.

Up 4-0 entering the bottom of the fifth, Lafayette quickly put the game out of reach for Saltillo. The first three Commodore batters of the inning reached base before Tyrus Williams brought one home with a bases-loaded walk. Just two batters later, Wilson Varner made it 7-0 with a two-RBI single. Capping the four-run inning, Williams took home during a distracted Saltillo pickoff attempt at first. 8-0 Lafayette.

Foster Westbrook calm and collected demeanor led the Commodores from the mound all night. Westbrook came out hot with a quick 1-2-3 first inning, and never seemed to let up. He needed to face just 14 batters to get the first 13 outs for the Commodores. Westbrook pitched a complete game allowing just one run. It will prove to be a critical seven innings as Lafayette will now play both of the next two nights.

“Outstanding. Outstanding. That’s the Foster Westbrook we saw most of the year,” said Lafayette head coach John Walker. “He’s been dealing with a hamstring injury and kind of re-injured it at Center Hill and he’s kind of labored coming back from that. But tonight everything was good.”

The lone Saltillo run came in the sixth. Down 8-0, Ryan Melton’s RBI double to the gap in right center prevented the Tigers from being shut out.

With the win, the Commodores advance to their first ever state championship series as a 5A school. It’s one heck of an achievement. The team went through coaching turnover and a jump from 4A to 5A in 2018, going just 11-12 in the process. Now Lafayette is at the 20-win plateau and playing in the state championship.

The Commodores head to Pearl on Wednesday to take on West Jones (27-5) in the first game of the MHSAA Class 5A State Championship at 4 p.m.