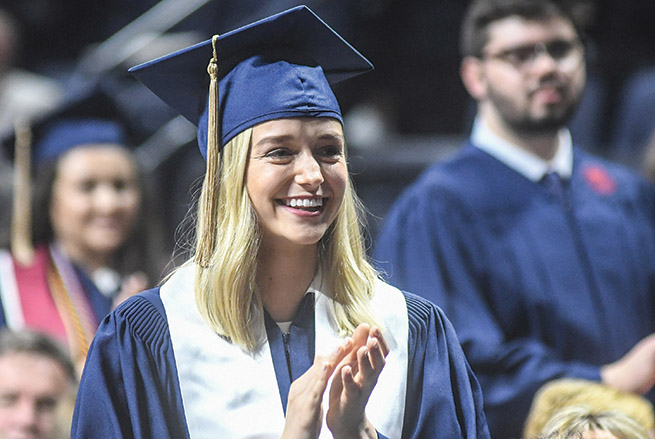 Graduate Sally Rychlak claps as candidates for degrees are recognized during the Morning Convocation for the University of Mississippi’s 166th Commencement at the Pavilion at Ole Miss, in Oxford, Miss. on Saturday, May 11, 2019. (Bruce Newman, Oxford Eagle via AP)

Despite being forced inside and away from the usually beautiful surroundings of The Grove, the University of Mississippi’s 166th Commencement ceremony went on as planned to begin Saturday’s graduation festivities.

University officials announced the ceremony would be relocated from The Grove to inside at The Pavilion as part of their inclement weather plan, marking the first time the facility has hosted Commencement.

With approximately 12,000 in attendance, including over 5,500 graduates, Interim Chancellor Larry Sparks and keynote speaker Retired Major General Augustus Leon Collins were the first to welcome the graduates to the next chapter of their lives.

Collins, a former commanding general of the Mississippi National Guard and president of the Ole Miss Alumni Association, graduated from Ole Miss in 1982 with a Bachelor of Business Administration. The Booneville native enlisted in the Mississippi Army National Guards’ Company B, 1st Battalion, 198th Armored Regiment in 1977 and served until he retired in August 2016. The retired general offered sage advice to those leaving and made a simple request.

“We will depend on you to tell the goodness that is Ole Miss,” Collins said. “We will rely on you to recruit quality students, such as yourself, to fill our ranks. …We were supposed to have this ceremony in the Grove, but Mother Nature had her own plans. But as I stand here and look across the Pavilion, I realize it doesn’t matter if it’s in the Grove or here in the Pavilion, there is no more breathtaking sight than graduation day at Ole Miss.”

During his introductory remarks, Sparks noted Collins’ numerous accolades and accomplishments as well as his service to Mississippi. The interim chancellor also took the time to address the graduates and expressed pride in them on the behalf of the University.

“Today we recognize the success of our students, families, faculty and staff,” Sparks said. “Today is a day to be enjoyed and remembered, a happy day for all of us. Our collective prayer for each of you is a life filled with joy, good health, successful and meaningful careers and peace.”

During Saturday’s ceremony John Young, associate professor of psychology, was recognized as the 2019 Elsie M. Hood Outstanding Teacher of the Year Award winner. The award is the university’s highest achievement for teaching. Ron Rychlak, a law professor, was also honored on Saturday with the Distinguished Research and Creative Achievement Award for his international renowned scholarship on several disciplines, including criminal law, gambling law, environmental law, international law and the study of religions in times of war.

The Class of 2019 announced a gift of a $6,700 donation to the Ole Miss Counseling Center, which was presented by class president Zachary Ryan DiGregorio during the ceremony.

“We wanted to do a gift that could hopefully save a life of a future Ole Miss student,” DiGregorio said.

Collins closed out his speech, and Commencement, with a statement and a familiar question.

“Ole Miss Class of 2019, the world is waiting for you, and I have just one question: Are you ready?”