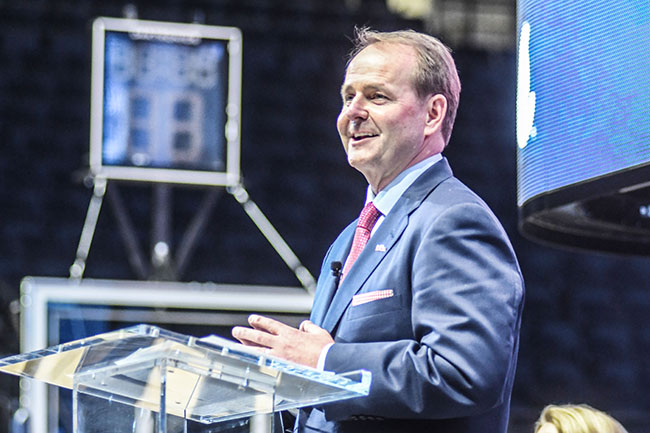 The 2019 NCAA Tournament didn’t end the way Ole Miss wanted it to,  but the 2019 offseason seems to be exceeding all expectations.

Monday night’s commitment of junior college transfer forward Khadim Sy just bolstered a class that was already going to make the 2019-20 version of the Rebel hoops squad quite a bit different than the prior version.

Rivals.com, the only recruit-tracking site that has updated their rankings following Khadim Sy’s commitment, now has Ole Miss’ 2019 recruiting class listed as the No. 15 class in the entire nation. It’s the second-best class in the SEC, just two slots behind Auburn sitting at No. 13.

Meanwhile, 247Sports is yet to update their ranks, but Rebel commits Bryce Williams and Antavion Collum are three-star players by their rankings – instead of the four-stars given by Rivals. Regardless, the Rebels will likely be hovering around a top-25 class when those ratings are updated.

All things considered, it’s a heck of a job by Kermit Davis in his first full year on the recruiting trail. To be completely honest, I always saw Davis as an average recruiter who will be able to get the most out of his players. On a consistent basis, I would’ve predicted a recruiting class ranked around seven or eight in the SEC with a team that finishes around five to seven in the conference.

Maybe this is still the case and the 2019 Rebel recruiting class is an anomaly. But right now it stands as an incredibly bright spot for a program that is very clearly on the rise.

No matter what anyone says publicly, the first step to program building is always getting good players. Building a culture and getting players to buy in to a new system is hugely important, but without good players, it’s all for nothing. When Kermit Davis took over the Ole Miss job, he inherited some really good players. Of the Rebel big three last year – Terence Davis, Breein Tyree and Devontae Shuler – Tyree and Shuler will be coming back. But now, the Ole Miss team is shaping out to look like what Davis said he wanted to build.

When talking to Davis about the style of player he wants to build around at Ole Miss, we didn’t get coach speak or generic answers. Davis was specific – he wants athletic, long, 6-foot-6 to 6-foot-10 guys that can play and defend multiple positions. Last year’s team saw glimpses of what that could look like, namely with 6-foot-7 swingman K.J. Buffen. But this recruiting class nails that vision right on the head.

Shooting guard Austin Crowley is the prized possession of the Ole Miss class. But he’s not really a standard high school guard. Think of some of the best college shooting guards of the past few decades – Dwayne Wade and J.J. Redick come to mind for me. They both stand at 6-foot-4. Crowley is 6-foot-6. He’s the perfect representation of what Kermit Davis wants.

As a whole, five members of the six-man class fit that above description of what Davis is looking for. Last year, the Rebels were forced to work with a pasting together of post players with Dominik Olejniczak and Bruce Stevens. Well now Stevens graduated and Olejniczak is transferring and Ole Miss actually has some guys that Davis is finally excited to play down low.

Carlos Curry, not an incoming freshman but one who redshirted last year, will likely start at the five. Curry is a guy the team is clearly excited about his progress. When doing an offseason sit-down with Kermit Davis, Curry’s name got brought up without my prompting on multiple occasions. Then Davis has a bevy of players from Khadim Sy to Sammy Hunter to Rodney Howard – all incoming freshman between 6-foot-9 and 6-foot-10 – to play down low beside him.

We here in Oxford can be impressed with how the program came around in just one year. But the signs on the recruiting trail is what really shows where the program is on a national stage. The get of Khadim Sy just about a month after landing Crowley, pulling the class to six players, is a massively positive sign and positive momentum for a program now drawing the national eye.