West Jones tallies 15 hits and 14 strikeouts, take game one of 5A State Championship over Lafayette 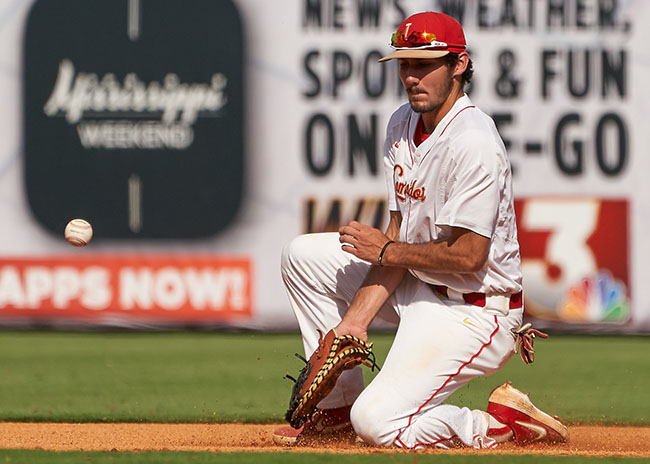 Lafayette High first baseman Luke Phillips can't handle a ground ball against West Jones during Game One of the MHSAA 5A Baseball Championship held at the Trustmark Park in Pearl, MS, Wednesday May 15th, 2019. (Bob Smith)

PEARL, Miss. – It didn’t take long for West Jones to leave their mark on game one of the 5A State Championship.

Playing at Trustmark Park in Pearl, the Mustangs hung back-to-back-to-back hits on Lafayette starting pitcher Wilson Varner to start the game Wednesday. Beating the Commodores 10-1, Lafayette now has their back against the wall for the first time during their championship run.

“They just outclassed us today, plain and simple,” said Lafayette head coach John Walker. “We really didn’t do a whole lot well. When you strike out that much, you’re going to have a tough time beating anybody, especially someone of that quality.”

It wasn’t the best night for Lafayette starting pitcher Wilson Varner. Being credited for just 2.0 innings, Walker pulled him in the top of the third after allowing the first four batters to reach base without recording an out. Varner would be credited for nine, eight of them earned, of the Mustang runs on the night. Chase Parks filled in for Lafayette, throwing really well over the final five innings of play. Final outcome aside, Parks allowed just a single West Jones run, striking out four.

“I thought Chase threw well. He came in and really kept it a ballgame,” Walker said. “He did a really, really good job. He didn’t allow them to get to that 10 run margin where they could maybe get that guy out of the game where he could be used again in the series. Other than that, we didn’t do a whole lot well.”

‘That guy’ was West Jones starting pitcher Dustin Dickerson. Throwing all but the final out for the Mustangs, Dickerson struck out 13 Commodore batters on the evening.

“He’s good. He’s a plus arm, one of the top three or four we’ve seen all year,” Walker said. “When we had the opportunity to scratch against him we didn’t. He did a good job of disrupting timing. He did it with his mechanics as well as his pitches.”

Despite the issues on the mound, the Lafayette bats had their own offensive struggles in the opener. Commodore batters recorded just five hits, scoring just once on Mustang starter Dustin Dickerson. The lone run for the ‘Dores came on an RBI single by Tyrus Williams in the third.

A positive spin: no one can blame anyone else. Even if the pitching staff had done their part, they likely still need more than five hits to pull out a win in the state title series. Dropping game one, Lafayette now needs to win consecutive games to bring the state title belt back to Oxford. It’s a team that’s bounced back before from tough losses, even doing so earlier this week against Saltillo. The key to that bounce back, according to Walker, is just to show up and be themselves.

They’ll play game two Thursday night at 7 p.m., and return to Pearl on Saturday for game three, if needed.