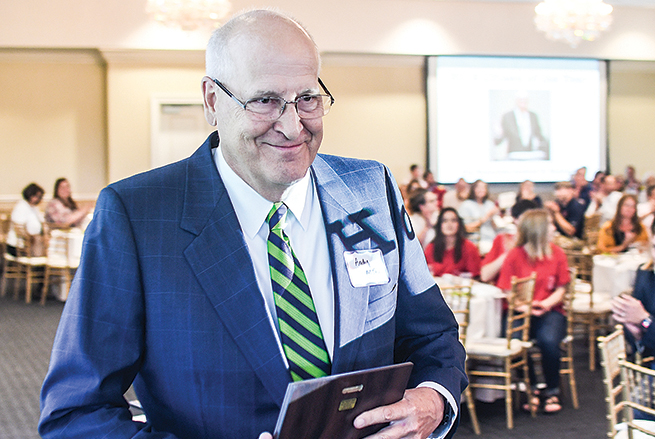 Andy Howorth was named "Citizen of the Year" during the Oxford-Lafayette Chamber of Commerce's annual meeting at the Inn at Ole Miss, in Oxford, Miss. on Wednesday, May 15, 2019. (Bruce Newman, Oxford Eagle)

Sitting in the back of the ballroom at the Inn at Ole Miss, Andrew Howorth assumed he was there in support of a close friend – turns out, he was tricked into attending the Lafayette County Chamber of Commerce and the Economic Development Foundation’s annual luncheon for a much different reason.

On Wednesday, Hon. Andrew K. Howorth was announced as Oxford’s Citizen of the Year for 2019, honoring his work as a judge as well as his work with the Lafayette County Drug Court.

“My wife told me my friend (John Currence) was going to receive the award and I needed to come honor him,” Howorth said with a smile. “I was sitting here and they say the recipient has been here virtually his entire life or something and I said ‘John hasn’t been here that long.’”

Howorth is the 48th recipient of the Citizen of the Year award, which began in 1972 with William McNeil Reed as its inaugural winner. To win, a resident must be nominated by someone and must fit several items of criteria, including positive volunteer contributions to Oxford, Lafayette County and University community; contributions above and beyond those normally expected in an elected or appointed position or above and beyond mere success in a business or a profession.

Serving as a circuit judge in the Third Judicial District of Mississippi, Howorth joined the court in 2002 and was re-elected in 2010 and 2014. Beyond his day job of serving over seven counties in Mississippi, Howorth also oversees the Lafayette County Drug Court. He founded the court in 2007 and spends every Thursday afternoon helping to rehabilitate convicted drug felons.  In November, Howorth was appointed by the Supreme Court of Mississippi to serve on the State Drug Court Advisory Committee.

“I love my town, and I feel like it’s my town honoring me and, obviously, that means everything,” Howorth said. “We’ve been doing drug court for 11 years and it’s been a life-changer. …Your hope is if you can treat the addiction then you can solve the criminality and the person that’s committing the crimes and is also an addict. They can find recovery then they quit breaking the law then they become productive citizens the community wants. It works pretty well.”

Howorth’s wife, Elizabeth, wrote the initial nomination letter and several of Howorth’s staff at drug court wrote additional letters on his behalf on why he deserved the honor. Howorth has served as president of the Oxford-Lafayette County United Way, commissioner of the Oxford Housing Authority and is a Paul Harris Fellow of the Oxford Rotary Club.

“His counsel and extensive knowledge of addiction, the courts and the recovery community is second to none,” EDF president and CEO John Maynard said during the presentation. “Andy is a man who truly cares about the community and has devoted his entire life to making Oxford the best place to live. There’s no better role model and Judge Andy Howorth.”

Other honors announced during the luncheon included the 2019 Outstanding Service Award, awarded to Tony Deal for his work with Oxford and Lafayette County veterans. The 2019 Ambassador of the Year was awarded to LOU Ambassador Tracie Russell of North East MS Electric Power. The Ole Miss athletics department helped sponsor this year’s award, and Vice Chancellor of Intercollegiate Athletics Ross Bjork presented Russell with 2019-20 basketball season tickets along with other items.